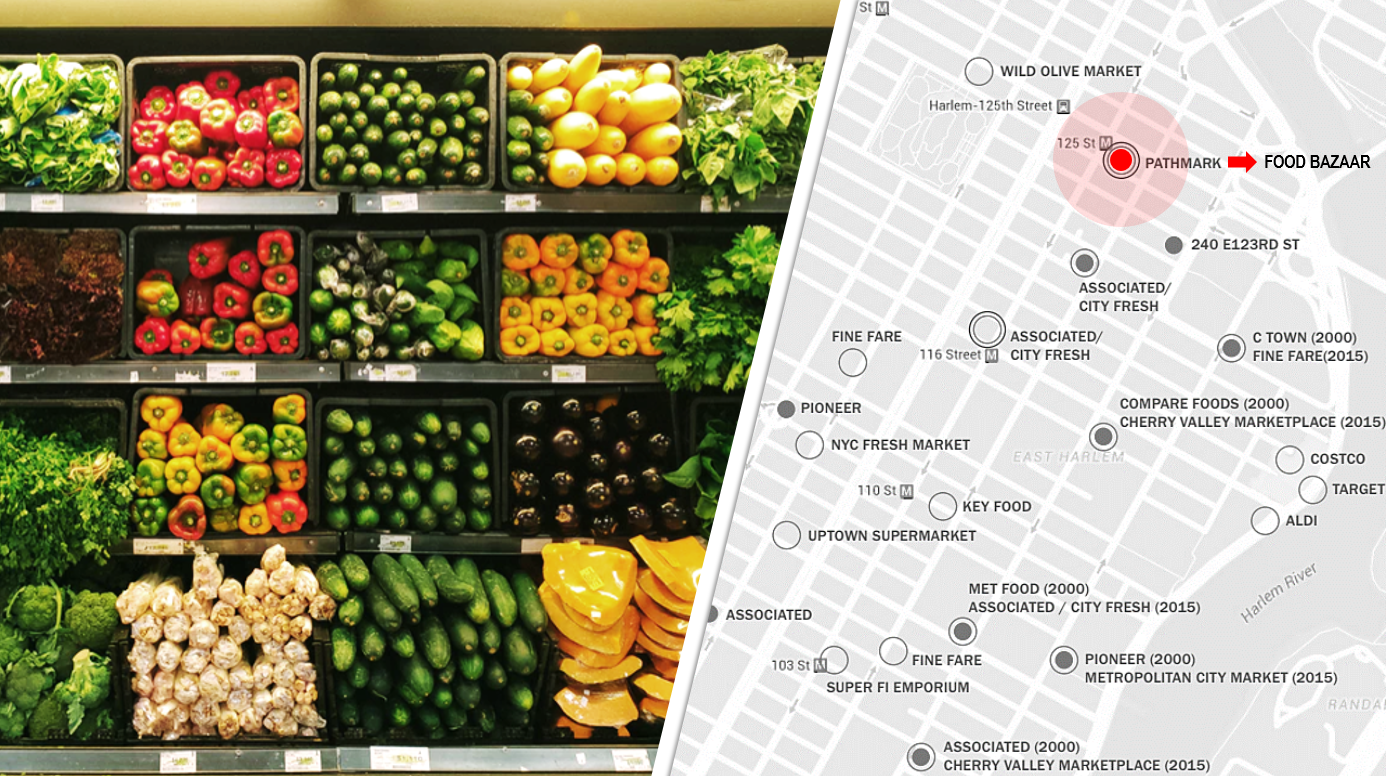 In 2016, CUNY Urban Food Policy Institute released the report Eating in East Harlem: An Assessment of Changing Foodscapes in Community District 11. The report found that, while the number of supermarkets in East Harlem had increased from 10 to 18 between 2000 and 2015, an increase of 80%, the number of fast food establishments had increased even more, from 11 to 47, a 327% increase. For every supermarket in East Harlem in 2015, there were almost three fast food outlets, one of the many reasons why East Harlem residents bear a disproportionate share of the city’s burden of diet-related diseases such as diabetes.

Now, three years after our report, Patch reports that Food Bazaar, a supermarket with dozens of locations in the New York City area, has secured a 20-year lease to occupy a 45,885-square-foot, two-story space in the One East Harlem development on Third Avenue and East 125th Street. In April, developers broke ground on this new development that will bring 400 apartments, retail space and 10,000-square-feet of public open space to the corner of Third Avenue and East 125th Street. Construction is expected to take two years, suggesting that Food Bazaar is unlikely to open until 2021.

Food Bazaar will be the latest large supermarket to open in East Harlem after years of supermarket closures, Patch reports. A Foodtown opened at the base of a new development on Third Avenue and East 121st Street in 2018. East Harlem lost a City Fresh supermarket in 2016 and the area’s largest supermarket, Pathmark on East 125th Street, closed in 2015. Almost two years ago, Whole Foods, now owned by Amazon, opened a store in Central Harlem, at the corner of 125th Street and Lenox Avenue, offering a wide variety of healthy — often expensive — foods.

So is the food retail environment in Central and East Harlem healthier today than in 2016? Will the new Food Bazaar make it easier for people in Harlem to find healthy affordable food? Some evidence suggests that’s not so simple. First, other studies have found that opening new supermarkets doesn’t necessarily lead to improvements in diet. Community residents decide what food to buy based on prices, food quality, the way store staff treat them, and the alternatives inside and outside the neighborhood. For a new supermarket to lead to change, it must address all of these concerns.

Second, fast food outlets continue to proliferate in New York City. In 2008 the Center for an Urban Future began tracking the growth of local chain retailers and restaurants and counted about 5,400 city locations. By 2017, that number had grown to 7,300. What struck Center’s Executive Director Jonathan Bowles was that one sector was responsible. “All the growth is in food,” Bowles said.

Today New York is home to 3,419 chain-restaurant locations, according to the New York City Department of Health and Mental Hygiene. Leading the growth spurt is Dunkin’ Donuts but McDonald’s, Chick-fil-A, Taco Bell, Popeye’s, Five Guys and Arby’s are on the upswing in the city, and most are well-represented in Harlem. As long as fast food places are easier to find, more affordable, and attuned to the needs of time-pressed hard-working families, single parents, and those who want time away from crowded or uncomfortable housing, new supermarkets will not by themselves solve our city’s food problems.

So how can residents of Harlem and other neighborhoods facing “food gentrification”, the process by which wealthy residents moving into a neighborhood change the prices and mix of available food, create healthier food environments? First, acting through neighborhood organizations, elected officials and local churches, Harlem residents can encourage the new Food Bazaar and other local supermarkets to adopt some of the practices that make it easier for people to choose healthy diets: discounts and promotions of healthy products, welcoming customers of all cultures and races, facilitating use of SNAP and other public food benefits, and avoiding promotions, discounts or aggressive marketing of unhealthy products that exacerbate the neighborhood’s health problems.

Second, as our Institute outlined in its report Food Policy in New York Since 2008, residents of low and middle income neighborhoods can demand a stronger voice in deciding which stores are opened in their neighborhoods and what marketing and retail practices are encouraged by city regulations and enforcement. In short, they can reclaim food democracy, the right to have a say in shaping our local food environments. Finally, New York City can take up what many other cities have already adopted—the creation of a comprehensive food system plan that sets targets for improving local food environments and holds public officials accountable for making progress towards those goals.