An Assessment of Changing Foodscapes in Community District 11, 2000-2015 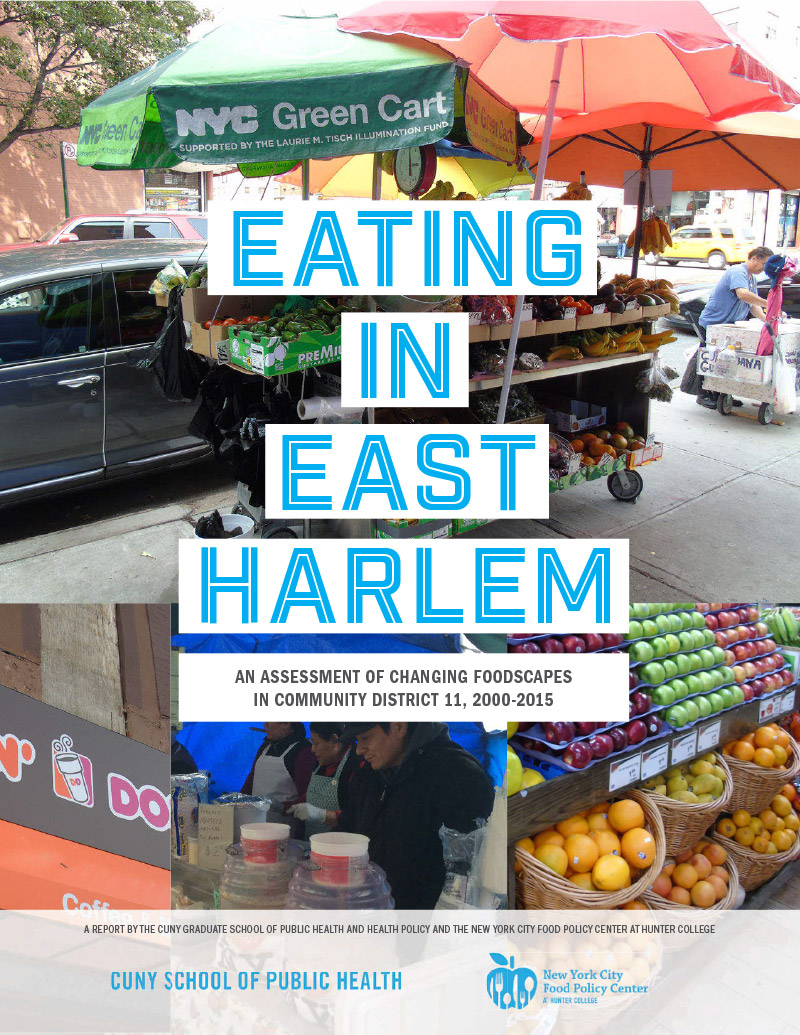 Since 2000, East Harlem has changed dramatically.

New retail and housing developments are springing up on Third Avenue, 125th Street and along the East River. New populations are moving in, changing the demographic composition of the community. Since 2014, a new Mayor and City Council have made improving East Harlem a priority, bringing new public resources into the neighborhood. In the food sector, many new food businesses and public and non-profit food programs have opened, presenting East Harlem residents with a wide variety of food choices.

Since 2000, East Harlem has changed hardly at all.

It still has among the worst health statistics in the city and experiences high levels of food insecurity and diet-related diseases. For forty years, East Harlem has been one the poorest neighborhood in New York City. The most common food outlets in East Harlem, now as in 2000, are bodegas and fast food outlets that still sell mostly unhealthy food. Now, as in 2000, many East Harlem residents still depend on SNAP (Food Stamps) and soup kitchens to get enough food to feed their families. For many, even these supports aren’t enough to ensure that no one goes to bed hungry.

How can we understand these two accurate but profoundly different assessments of East Harlem? How can we better understand what has and has not changed and why? How can we use evidence of change to set meaningful goals in food policy but also in other areas — for East Harlem for the next 5, 10 or 15 years? How can we ensure that the residents, organizations and leaders of East Harlem have the information they need to make informed decisions about our community’s future?

In this report, we analyze how foodscapes have changed in East Harlem since 2000. In the last 15 years, there has been a growing recognition that food is a lens through which we can examine health, poverty, economic development, culture and happiness. Foodscapes are defined as the places where people in East Harlem acquire, prepare and eat their food. They also describe the institutional arrangements, cultural and social spaces, and policies that shape how and what people eat.

To identify changes in health and well-being, we make comparisons across time and place. Comparing East Harlem to one of the wealthiest and healthiest communities in New York City allows us to ask: What changes in living and economic conditions in East Harlem could produce the health results achieved by residents of the Upper East Side?

Differences in economic and social conditions also influence food environments. Thus, East Harlem residents seeking to shrink the many gaps between our community and our wealthier neighbors to the South will need to consider what economic and social changes will be needed to achieve our food goals- and what changes in food can contribute to the broader goal of a healthier, more just city.

This report reflects the incredible work of the many community groups that work to improve the health and well-being of East Harlem residents. It seeks to recognize and celebrate the progress we have made. But we also want East Harlem to be better able to identify what else needs to change in order to create a community where hunger and food insecurity are history and where epidemics of diet-related conditions like obesity and diabetes are on the road to elimination.

No community can prosper and sustain itself without access to healthy, affordable food for all its residents. This report is dedicated to strengthening East Harlem’s capacity to turn that vision into reality.

We invite input and corrections from our partners and consider this to be a living document intended to serve East Harlem the best way it can. Please send comments, corrections and suggestions to urbanfoodpolicy@sph.cuny.edu.