A Guide to Institutional Meals 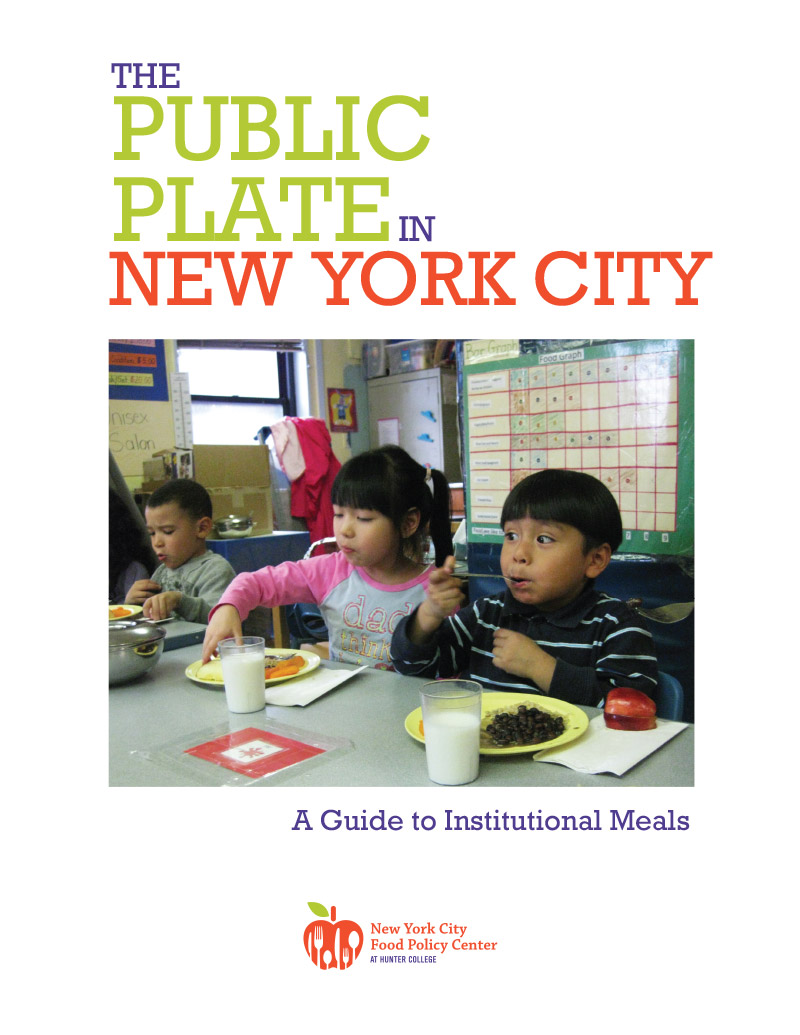 Each year, ten New York City agencies serve an estimated 260 million meals, making the City one of the largest meal providers in the world. With the rising prevalence of diet related disease and mounting evidence of the crucial role of nutrition in determining health, interest has escalated in what urban planner Kevin Morgan has called “the public plate” as a lever for improvement of public health.[1] Others have noted that the sourcing of food for the public plate can support local and regional agriculture and food producers and provide stable employment for the growing population of under and unemployed New Yorkers. At the same time, environmentalists have raised concerns about the handling of waste from municipal agencies in general and from meals in particular, and about the carbon footprint and other environmental implications of urban food procurement practices. Finally, institutional meals are an important defense against hunger, a problem that continues to disrupt the lives and health of too many New Yorkers. Thus institutional food is at the intersection of health, economic development, environmental protection, and social justice.

The City spends more than a quarter of a billion dollars annually for the food served on the public plate, and nearly as much on labor for food preparation. Some NYC meals are planned, prepared and served directly by municipal agencies in public institutions such as schools and jails. Others are offered by independent nonprofit organizations with which the City contracts, such as senior centers or child care programs. Some are prepared by City employees in kitchen facilities owned and operated by the City, or by the staff members of contracted organizations in their own kitchens; others are produced by vendors from whom the meals are purchased by city agencies or contracted programs. Some are served at the sites at which they are prepared; others are prepared in central kitchens and delivered to satellite locations. This report explores this complex mix of institutional meals served by the City of New York.

Institutional meals in New York City rely heavily on federal funding. More than four-fifths of the cost is fully or partially reimbursed through federal child nutrition programs. In 2011, the Independent Budget Office calculated that the federal government, through the national School Lunch Program and the School Breakfast Program contributed $404,815,000; the State of NY $18,010,000; and the City $73,068,000 to school meals in New York City. The federal Child and Adult Care Food Program (CACFP) funds additional afterschool snacks and meals in child care centers, and the Summer Food Service Program funds meals offered in schools, parks, pools, libraries and other recreation programs. Further, meals served at senior centers and to homebound elderly and disabled persons are funded through the Senior Nutrition title of the Older American Act. In short, institutional meals use federal and to a lesser extent state dollars to ensure the well-being of New Yorkers and boost the economy.

The reach of the City’s institutional meal service is great. On a typical school day, more than three-quarters of a million New Yorkers eat these meals: 638,000 school children, and more than 100,000 people in jails, homeless shelters, senior centers, meals on wheels programs, public hospitals and nursing homes, child care facilities, and substance abuse and mental health programs. Many eat more than one meal—students may eat breakfast and lunch at school, and a snack in an afterschool program. Hospitals, nursing homes, homeless shelters and jails provide three meals per day. At least 10,000 people work to produce and serve these meals. Add in the suppliers and distributors, the truck drivers, the administrators, the farmers and food processors, and the impact of this system on health and the economy is truly enormous.

1. References are included in the full report.

Prepared when Institute faculty were based at the New York City Food Policy Center at Hunter College.