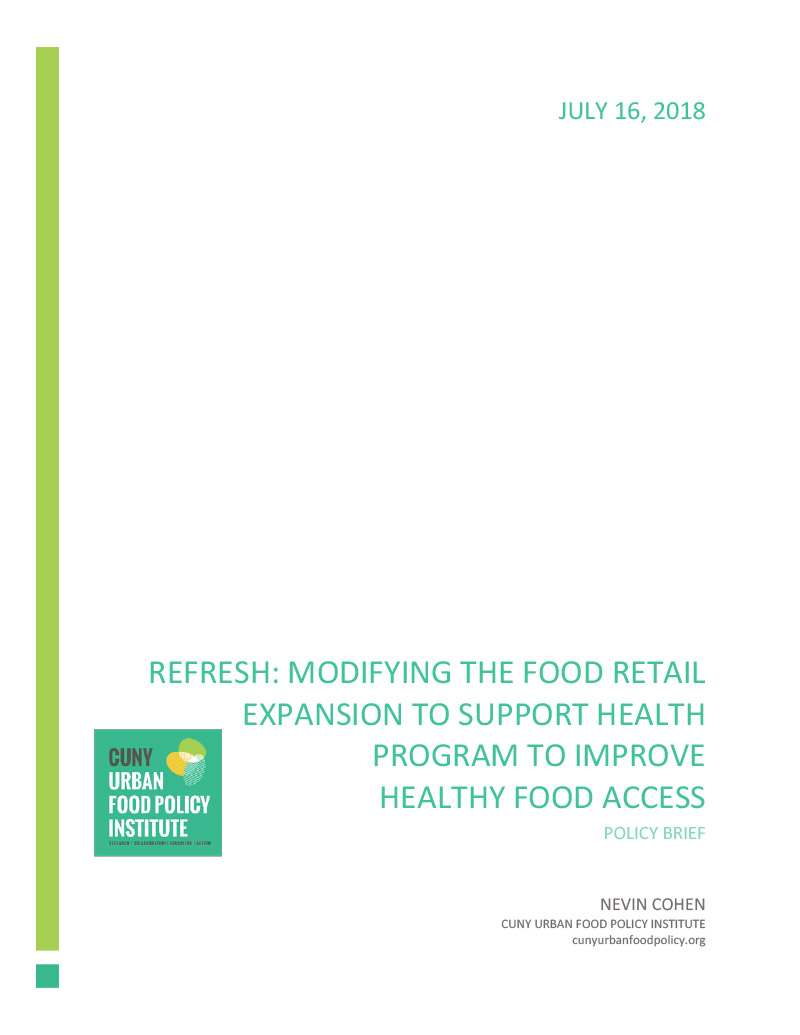 Since its implementation, FRESH has supported the construction, renovation, expansion, and equipment purchases of 27 supermarkets (See Table 1).2 Yet during this period, diet related health indicators have barely budged. Fruit and vegetable consumption by adult New Yorkers remained inadequate between 2008 and 2015. Moreover, disparities in fruit and vegetable consumption between whites and Blacks increased during this period and decreased only modestly between whites and Hispanics. Disparities in overweight and obesity have also persisted, with about two thirds of Black and Latino adults, half of white adults and about a third of Asian/ Pacific Islander adults reporting they were obese or overweight in both 2008 and 2015.3 A key question that the NYC Council’s Subcommittee on Zoning and Franchises explored in a recent oversight hearing on FRESH [“REFRESH: Assessing the zoning and financial incentives of the Food Retail Expansion to Support Health program,” 6/21/2018] was whether and to what extent the policy can achieve its goal of supporting health in its current incarnation. This Policy Brief, which informed testimony that the Urban Food Policy Institute presented to the Council, illustrates that FRESH needs to be re-designed in several key ways. Several other health and food advocacy organizations that testified at the REFRESH hearing made similar recommendations.4 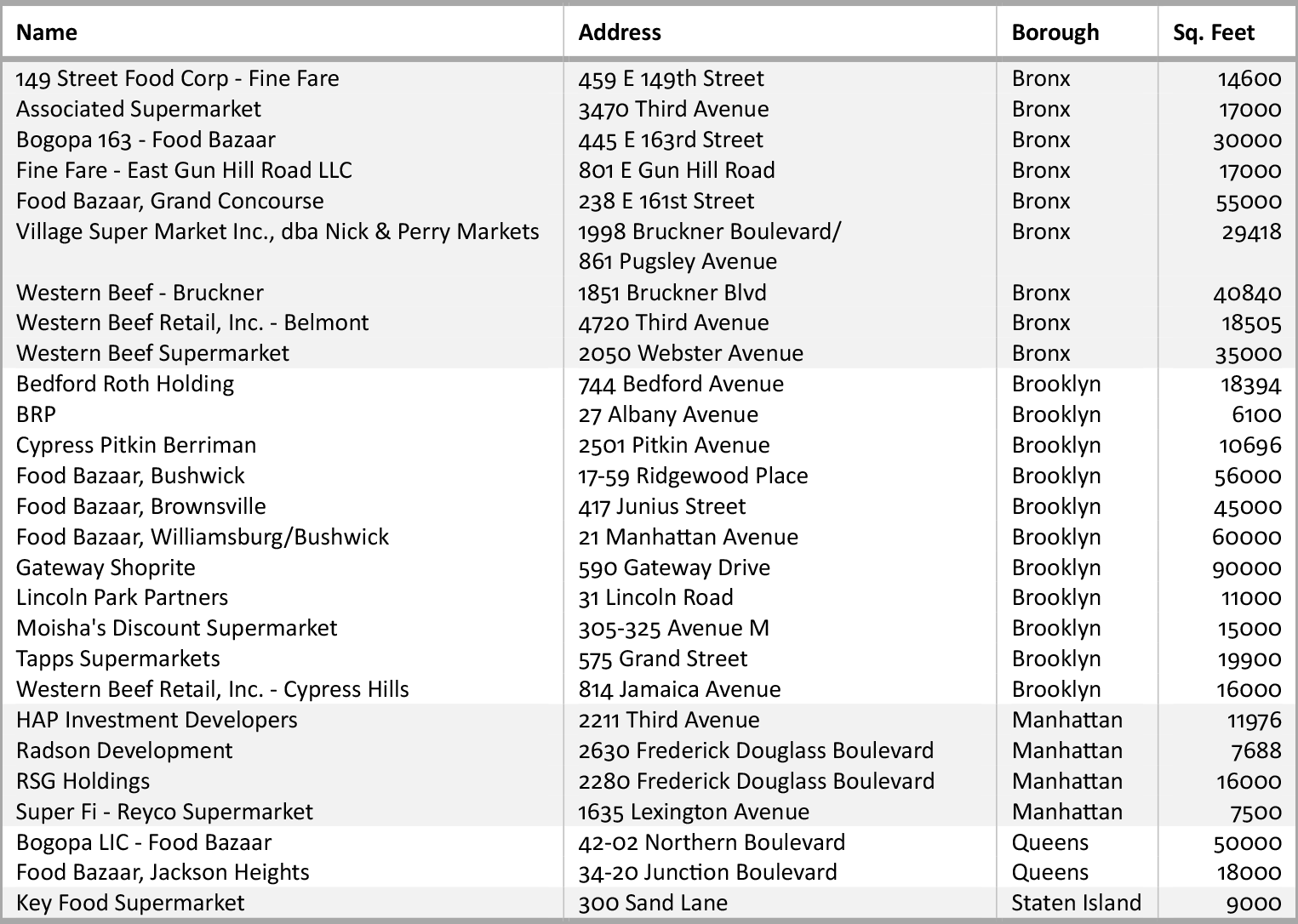 One of the problems is that the theory underlying the program may be flawed. When FRESH was designed, the consensus in the public health community was that the dearth of healthy food in low-income communities, combined with easy access to cheap fast food, was an important factor in malnourishment. Cities throughout the country began to map so-called food deserts and found that the residents of these neighborhoods had high rates of diet-related diseases. A common belief was that increasing the availability of healthy food like fresh fruits and vegetables would nudge residents to eat healthier, stemming rising obesity rates and reducing disparities in diet-related chronic diseases. Early studies seemed to show that new supermarkets increased fruit and vegetable consumption, encouraging the adoption of programs like FRESH. However, more recently, study after study has shown that the relationship between access and diet is more complex. Adding supermarket capacity to an under-served neighborhood does not, in itself, appreciably alter shopping, buying, and eating behaviors, and thus has little measurable effect on diets, nutrition, and health. Residents may appreciate having new or renovated supermarkets in their neighborhoods, but there is little evidence of significantly changed shopping behavior or nutritional health.

In developing FRESH, city planners assumed that people are willing to walk one-quarter mile (an approximately 5-minute walk) for goods and services. Yet data show that consumers do not generally shop at the grocer closest to home, but rather have more varied shopping patterns influenced by activity patterns, buying strategies, social networks, and the location of other food (and non-food) retailers.5 Behavioral economics suggests that people would choose the “default” or easy options, but when shopping for food, urban residents, particularly those on constrained budgets, often choose value or quality over the easiest option.

In fact, studies conducted over the past decade confirm that new or upgraded supermarkets rarely disrupt shopping patterns or improve indicators like BMI.6,7 They indicate that new supermarkets may improve perceptions of healthy food access but do not appear to change shopping and buying practices, and that supermarkets, which sell both unhealthy and healthy products, do not necessarily alter the balance of unhealthy and healthy items purchased and consumed.

How can the City Council address these limitations of the FRESH program? We suggest the following six strategies:

Identify Food Access Needs Through Community Planning, Not Only Through Area-Wide Indices

FRESH offers incentives to food retailers located within FRESH boundaries (See Figure 1). While boundaries provide a simple criterion for applicants and administrators, they are overly blunt measures that treat all residents within and outside them the same, and thus obscure the specific food needs of the most vulnerable. Area-wide boundaries make it difficult to prioritize locations, enabling supermarkets to get incentives even when they are adjacent to other brand-new supermarkets (See Figure 2).

Community-based food retail planning would be a more effective strategy for locating FRESH projects than the current area-wide designation. While the ULURP process allows for public input into zoning processes, proactive planning would engage residents in discussing the types of food retail needed within their neighborhood, potential sites for new and expanded retail, and strategies to attract food retailers to those sites and to encourage existing food retailers to expand. 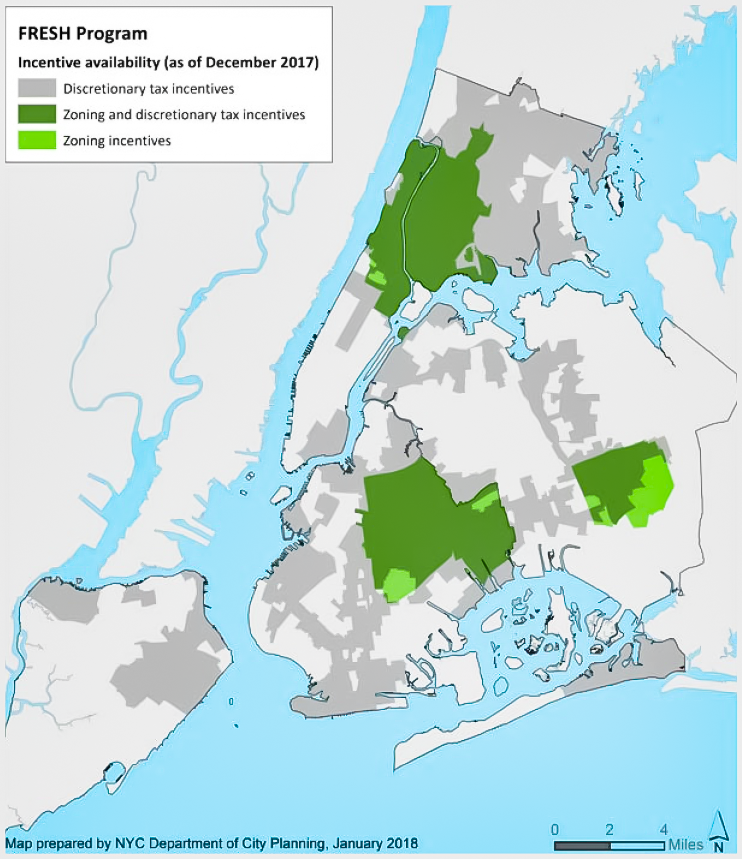 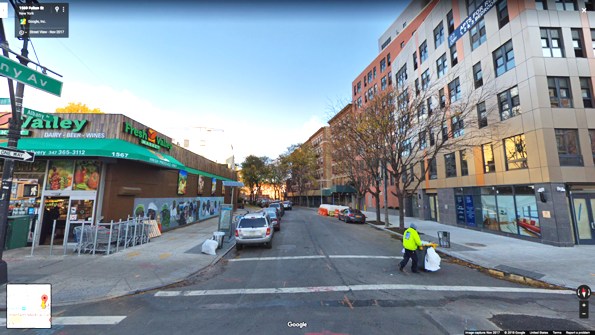 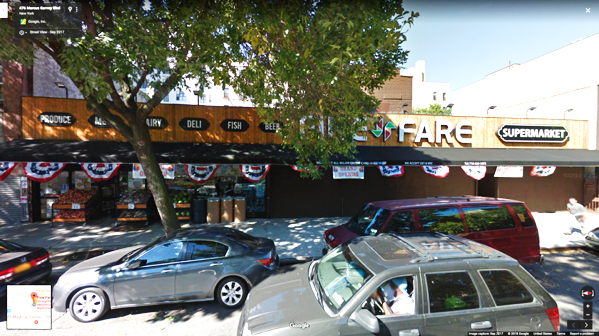 Focus on Availability of Affordable Healthy Foods, Not Square Feet of Retail Space

The FRESH program is designed to increase the square feet of supermarket space per capita, yet the size of a supermarket is not related to the quality, value, healthfulness, or appeal of the products for sale, and thus is not a meaningful indicator of access. Using square feet as a standard to qualify for FRESH makes administration of the program simple but is not an indicator of desirability (which is better reflected in the revenue a store generates per square foot) or healthfulness.

Move Beyond the Traditional Supermarket to Support Other Healthy Food Purveyors

The reliance on supermarkets and other large retailers as an indicator of access also underestimates the availability of healthy food sold by other types of retailers.8,9 Small grocers like fruit and vegetable stores, ethnic markets or farmers markets may better meet the needs of some communities than conventional supermarkets by specializing in healthy produce or by selling affordable, culturally appropriate foods. In a city of 3.3 million foreign-born residents, ethnic retailers may be better able to meet the needs of a large portion of the city’s population than the conventional supermarket formats prioritized by FRESH.10

The FRESH program remains focused on supermarkets while the entire food retail sector is being transformed. Sales at conventional supermarkets have flattened nationally over the last few years, and this has affected the New York City market as well (see Figure 3). FRESH will become less and less relevant if it does not take the effects of food gentrification into account. 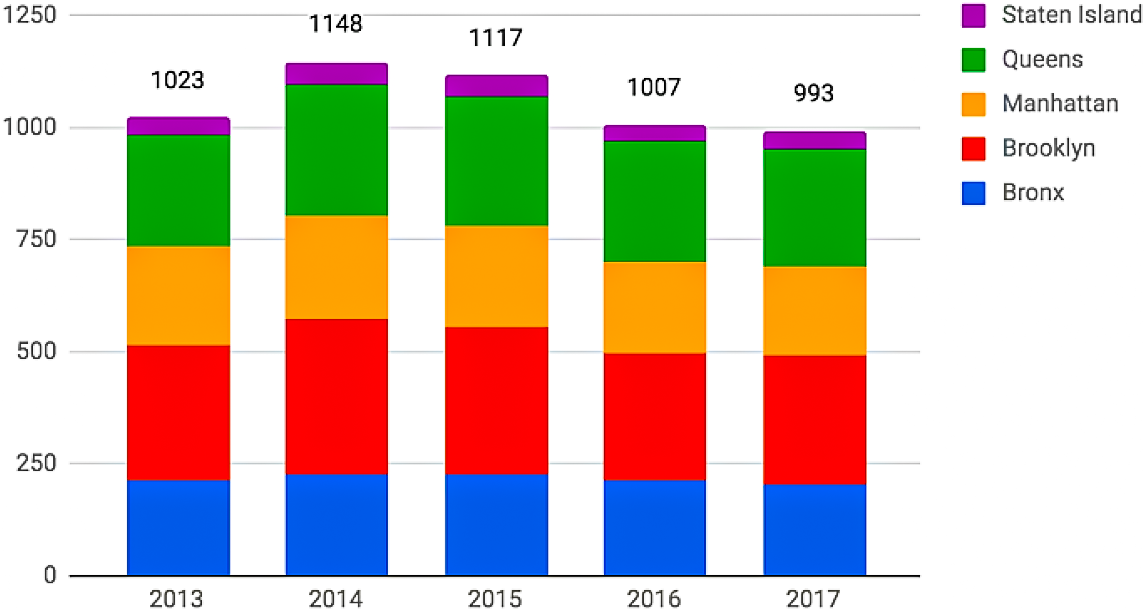 Food gentrification is a process that transforms neighborhoods such that food and other goods and services, as well as housing, become more expensive and less affordable for long-time residents. Food gentrification has resulted in the growth of food retailers in gentrifying neighborhoods, often accompanied by higher prices, product selections, and store branding that excludes longer term residents. Some of the most vulnerable supermarkets are on soft sites (parcels with more development capacity than the current use) in neighborhoods that may be poised for gentrification, like the communities that have been re-zoned to encourage more residential development.

The continued shift to club chains and mass merchandise stores like Target and to chains that appeal to younger, more affluent consumers, such as Trader Joe’s and Whole Foods, has also hurt conventional supermarkets. Not only are these types of food retailers appealing to different types of shoppers, but they are in different neighborhoods than the stores that have closed.

Prioritize the Needs of NYCHA Residents

With approximately 400,000 low-income residents, improving food access in NYCHA developments should be the Council’s highest priority. Research shows that NYCHA residents have among the city’s highest rates of diet-related disease.11 But rather than simply try to offer incentives to conventional supermarkets to locate near NYCHA, an innovative food access strategy would involve residents in identifying and creating the solutions.

Ultimately, food access comes from having sufficient income to pay for food. In addition to focusing on the availability of food retailers, the City Council should treat policies to raise income as food access policies. These include higher minimum wages, truly affordable housing, access to affordable health care and child care, reducing transportation costs and increasing the number of eligible New Yorkers who take advantage of food benefits like SNAP, WIC, and school lunches. Some recent successes in NYC include universal free school lunch, the fight for $15 campaign, universal pre-kindergarten, a paid sick leave law, fare fares, and other social policies which benefit low wage workers, including food workers who paradoxically are among the most food insecure. By using its full range of municipal powers, New York City can help to create a city with more equitable access to healthy affordable food and other necessities of life.

Nevin Cohen is an Associate Professor of Health Policy at the CUNY Graduate School of Public Health and Health Policy and Research Director of the CUNY Urban Food Policy Institute.

6. Steven Cummins et al., New Neighborhood Grocery Store Increased Awareness of Food Access but Did Not Alter Dietary Habits or Obesity, 33 HEALTH AFF. 283, 283 (2017); Tamara Dubowitz et al., Diet and Perceptions Change with Supermarket Introduction in a Food Desert, but Not Because of Supermarket Use, 34 HEALTH AFF. 1858, 1858 (2015).

7. Ryan J. Gamba et al., Measuring the Food Environment and its Effects on Obesity in the United States: A Systematic Review of Methods and Results, 40 J. Community Health 464–475 (2015).

8. Access to Affordable and Nutritious Food: Measuring and Understanding Food Deserts and Their Consequences USDA Report to Congress pg. 16