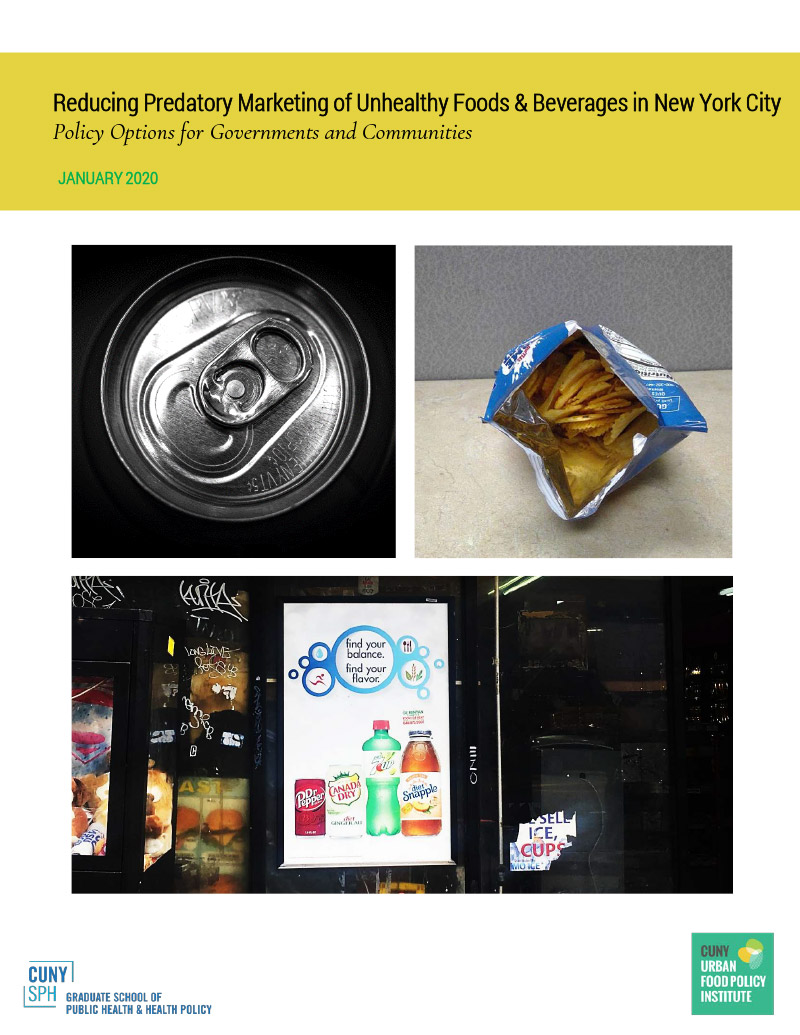 Predatory marketing describes the practice of disproportionately marketing unhealthy products to certain populations by using aggressive, emotional, misleading, and pervasive advertising strategies. A growing body of evidence shows that unhealthy food is replacing tobacco as the leading cause of premature death and preventable illness in New York City—as well as in the nation and the world. In addition, public health, marketing and business researchers have shown that high levels of food industry marketing of unhealthy food has contributed to the global increase in diet-related diseases.

As New York City considers strategies to accelerate progress on reducing the high rates of diet-related disease and the wide income and racial/ethnic gaps in diet-related disease rates, the CUNY Urban Food Policy Institute is pleased to contribute new research on the role of predatory marketing of unhealthy food and beverage consumption here in New York City. Our goal is to provide evidence that policy makers, public health practitioners, health professionals, community organizations, young people and others can use to take action to reduce exposure to predatory marking of unhealthy food and minimize its impact on the health of New Yorkers.

Over the next few months, we will be releasing four reports on predatory marketing that share the results of studies we have completed with the support of the New York City Mayor’s Office for Economic Opportunity (NYC Opportunity). We thank them for this support and note the findings and conclusions in our reports reflect our own work and opinions, not those of our funders or the City University of New York. The four reports we will be releasing, starting with the first this week, are:

What do we know about Predatory Food and Beverage Marketing (PFBM)?

Over the past two decades, research on food marketing, both academic and corporate, has rapidly expanded. Yet, despite the significant theoretical advances in marketing research, to date, predatory food and beverage marketing (PFBM) practices and policy measures have received only limited attention.

A scan of the peer-review publications on the topic revealed that while, at present, there is no single unified definition of PFBM, common characteristics of PFBM practices include the misleading, aggressive, emotional, and pervasive marketing of unhealthy products to certain populations. For these groups existing health burdens such as higher rates of diabetes, obesity, cardiovascular diseases and certain forms of cancer are likely to be exacerbated by normalizing the current high rates of consumption of these products. PFBM also widens gaps in inequitable food environments and inequitable dietary health outcomes by class, race, and community.

Scientific research approaches used to study PFBM in the built environment vary and the field is currently being dominated by cross-sectional observational research designs conducted in neighborhoods with specific sociodemographic characteristics or at specific sites such as schools, public transit stops, and supermarkets. Other researchers have begun to study the rapidly growing field of digital marketing of unhealthy food. Still mostly unexplored is how community-based, digital and mass media predatory marketing interact to influence dietary behaviors and how these cumulative effects vary by class, race/ethnicity and other sociodemographic characteristics.

Overall, our analysis of the literature showed a dearth of research on the impact of outdoor PFBM on eating behavior and health. However, the few existing outcome-focused studies point to a positive association between exposure to PFBM and higher dietary intake and likelihood of obesity among the individuals targeted by PFBM. At present, most existing evidence focuses on the PFBM health impacts on children which presents opportunities for focusing future research on other affected populations as well, but also offers a critical mass of insight to inform and advocate for policy change.

How have governments regulated PFBM?

A mix of federal, state, and local policies regulate and set limits on PFBM. These policies and laws address where such advertising can be placed, the content—or truthfulness—of the ads, and who can be targeted. Generally, separate rules address digital, mass media and community advertising. Laws regulating the advertising of food and beverages to minors or in specified settings such as schools or transit systems are two of the most popular approaches. Our PFBM policy scan identified 56 separate policies from which we extracted eleven distinct policy approaches, varying in their adoption, rigor and impact. These include:

In contrast to laws restricting predatory marketing, several states have acted to make it more difficult to limit predatory marketing. In these states, lawmakers try to weaken efforts to address PFBM by enacting laws to inhibit local government’s ability to address this issue, thus potentially worsening the problem. Examples of this approach includes measures to curtail or preempt local government from imposing nutritional standards or banning incentives. Other preemptive laws, such as the bans on local soda taxes passed in Washington State (Initiative 1634), Arizona (House Bill 2484), and California (Assembly Bill 1838) in 2018, pose a serious threat to reducing predatory marketing.

How can communities and residents take action to limit PFMB?

The CUNY Urban Food Policy Institute developed a comprehensive guide to resisting predatory marketing to assist public health agencies, youth, community and civic associations and schools to take action to reduce predatory marketing of unhealthy food and drinks in their communities and institutions. It also seeks to provide public health professionals, policy makers and advocates with information they can use to assist individuals and communities to resist and reduce predatory marketing at the individual, family, organizational and community levels. Our goal in the Guide is to assist many types of organizations—schools, youth organizations, food justice groups, faith-based groups and others to recognize and resist food and drink corporations that knowingly target certain vulnerable groups with advertisements of unhealthy foods and drinks.

Using primary and secondary research captured by the environmental scan, literature review, and policy brief, the Guide to Resisting Predatory Marketing: Strategies to Protect Families and Communities from Marketing of Unhealthy Food and Beverages discusses what is predatory marketing, how to recognize it, actions readers can take in their community to combat it, polices that facilitate or block PFBM, and lessons to be learned from other movements countering predatory marketing of other unhealthy products.

We specifically highlighted recognizing predatory marketing on social media. Companies are using platforms like Facebook, Instagram, and YouTube, along with influencers (persons with large social media followings who can persuade their followers purchasing behavior) to promote their products. The Advertisements are woven into platforms so seamlessly that it can be difficult to recognize the commercial message. Once recognition occurs, we recommend taking actions such as leading demonstrations and boycotts against food and beverage companies, using social media as a countermarketing tool, and conducting a community scan, preferably one lead by those who are themselves the targets of predatory marketing so they may lead and develop solutions within their communities.

How is PFBM manifested in NYC?

The findings suggest that New Yorkers who live and work in better-off neighborhoods are more likely to encounter food and beverage marketing that promotes healthy dietary patterns than their peers who live and work in lower-income areas. New York City has an opportunity to develop policies that shrink this inequitable exposure to healthy and unhealthy food measures and thus reduce the gaps in health determined by the zip code you happen to be born and live in.