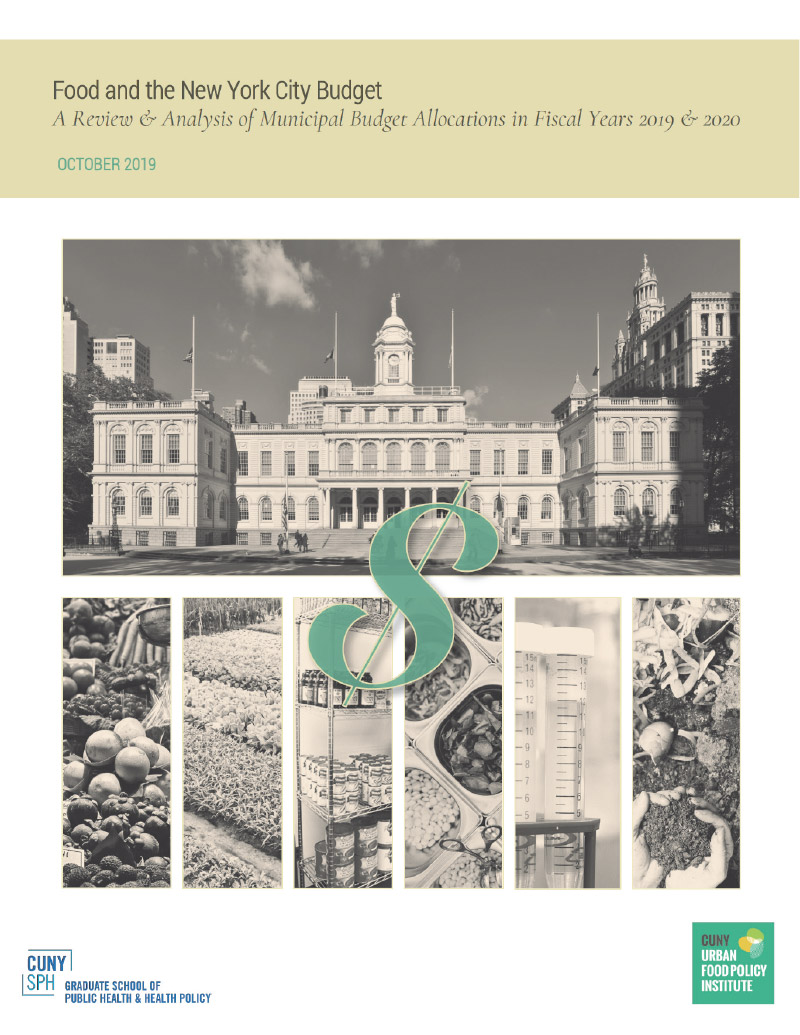 Note to Readers: This report is based on information available through October 25, 2019. Since the process for budget allocation and spending is dynamic and since this report relies on a variety of not always consistent public sources of evidence, we ask readers to send additions, corrections or suggestions to this report to urbanfoodpolicy@sph.cuny.edu by December 1, 2019. In early 2020, we will release an update to this report including an analysis of the Mayor’s Preliminary 2021 Fiscal Year Budget as well as additions or corrections to this report.

How New York City government spends its tax dollars affects every aspect of the food New Yorkers produce, sell, buy, prepare, eat and dispose. Budget decisions shape who is hungry and who not, how many New Yorkers suffer from diet-related disease, how easy it is to find healthy affordable food in all the city’s neighborhoods, and the extent to which labor laws protect low-wage food workers.

Yet the complex process of approving and spending the city’s budget and allocating funding to various food-related programs and policies remains obscure for many New Yorkers, including even those who are committed to creating healthier and more equitable and sustainable food systems. In this report, the staff of the CUNY Urban Food Policy Institute seeks to illuminate this process. Our goal is to enable New Yorkers, including community residents, advocates, and policy makers to participate more fully in budget decisions. By describing how New York City government allocates its budget, makes capital investments, distributes grant funding, expands or eliminates established food programs, and considers the budget requests put forward by local communities, this report sets the stage for ensuring that New York City’s food-related budget is spent widely and effectively.

More broadly, the report contributes to the creation of ongoing platforms where food-specific items in the city budget can be tracked, monitored, and summarized across multiple agencies and organizations throughout the budget planning cycle.

The creation of a dedicated platform for monitoring municipal food spending is a critical step towards encouraging the city to take a whole system approach to planning for New York City’s complex food system. The development of this approach was one of the key recommendations of the recently released Growing Food Equity in New York City report by the New York City Council. A systems approach may help overcome one of the limitations of the first wave of food activism in New York City, which proposed many competing goals, did not set priorities, and allocated insufficient new resources to achieve key goals.

By critically analyzing how New York City spends money on food and ensuring stronger coordination of multiple programs and policies, city government and residents can better achieve their goals of creating a healthier, more equitable and sustainable food system. As we show in this report, a systematic scan of three key components of the city budget for fiscal years 2019 (FY19) and 2020 (FY20):

shows that a more holistic view of food systems and public spending in the city is achievable.

This report summarizes information on the budgeting process and current funding for some key food programs supported by the New York City government. While not all publicly available datasets enable detailed analyses of all categories of the food budget, they do offer a wealth of information that New Yorkers can use to learn more about the ways in which different food system goals are advanced or delayed as a result of the budget decisions every year.

The report seeks to answer these questions

Our main findings are

This report was supported by a grant from the Wilhelm Loewenstein Trust at the New York City Community Trust. We gratefully acknowledge their support and would also like to thank research assistants Emma Christie and Jerad Dumolt for their help in the development of this report. The opinions expressed in this report are those of the authors, not their employers or funders.

[1] This is an estimated amount based on the analysis of the DFTA Spending data for FY19, available through Checkbook NYC. Spending data for FY19 shows that there are about $78,101,132 spent for congregate meals/lunches and social services for older adults. These funds are not directly identifiable in the publicly available datasets on the adopted budgets as they are included under an aggregate budget line. As spending for FY20 is still ongoing, to estimate the FY20 budget amount for this program, the additional $10 million in baseline funding negotiated by the City Council for the program were added to the FY19 spending amount (see New York City Council, Schedule C, June 19, 2019).

[3] This amount reflects the information provided in the most recent modified FY20 budget where a new “Greenthumb Proj” budget line, with budget codes 6893 and 2821, includes a projected spending for about $7,789,014.00 for Maintenance & Operations (OTPS and PS).