A Guide for Faculty and Staff 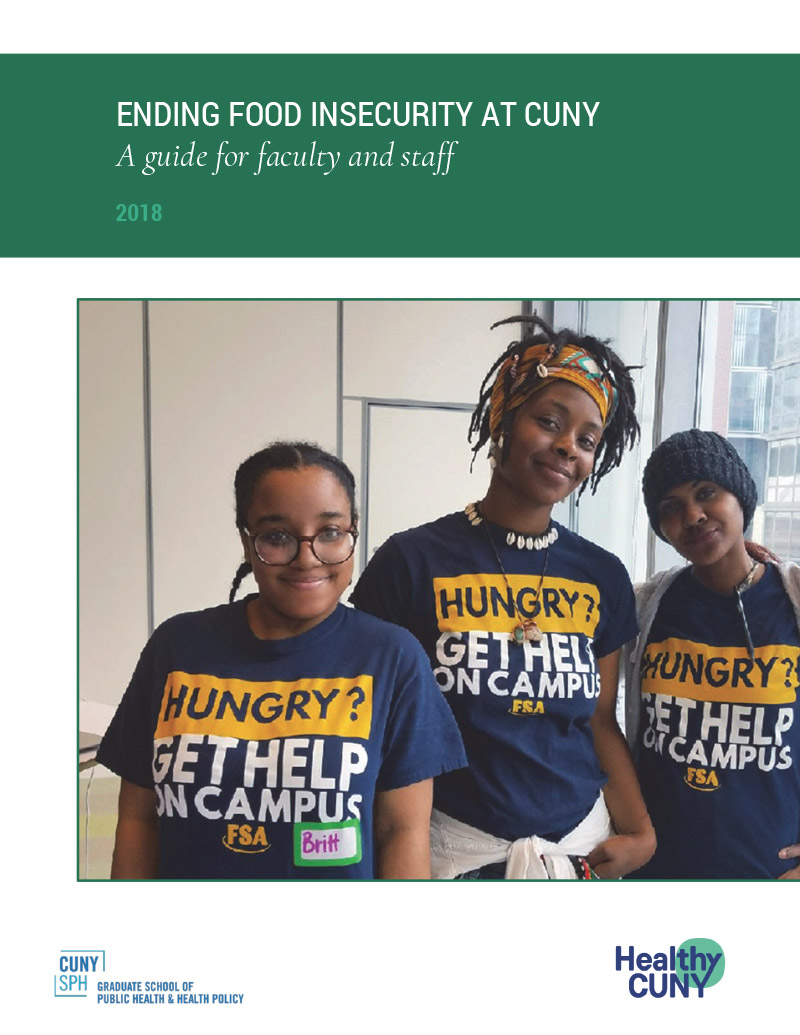 According to surveys of CUNY students, about 60,000 CUNY undergraduates –about one in four– experience food insecurity,1 defined as not having enough resources to regularly get the food needed to maintain health.2 Hunger and food insecurity are among the most debilitating consequences of poverty. Not having enough to eat or having to worry about whether you can afford your next meal makes it harder for students to stay in school and to achieve their full academic potential. While poverty is the underlying cause of food insecurity, college students face other life circumstances that put them at risk of being hungry and require the attention of higher education policy makers.

For CUNY, which aspires to be the world’s greatest urban university, setting the goal of ending food insecurity among its students within five years provides our university with a specific and achievable opportunity to translate this vision into practice. In this guide, several faculty who have been tackling food insecurity at CUNY in the last several years have teamed up with the CUNY Urban Food Policy Institute and Healthy CUNY, a university initiative to promote health for academic success at CUNY, to propose some ways that CUNY faculty and staff can contribute to the goal of ensuring that within five years all CUNY students will be food secure.

In previous reports, Healthy CUNY has described roles that CUNY students, nonprofit groups, university administrators, and city, state and federal policy makers can take to end food insecurity and other health problems among CUNY students.3 In this report, we focus on roles for faculty and staff. Ending food insecurity at CUNY will require a full mobilization of CUNY faculty, staff, students, and administrators. This Guide is our effort to contribute to that aim.

Although the definition of food insecurity is broadly applicable to all groups, how our students and their families achieve food security depends on their specific life circumstances. For CUNY’s food insecure students, there are many paths to food security. This Guide aims to define and illuminate as many paths as possible that will make it easy for students to find healthy food they can afford and to support students in achieving their own vision of healthy food choices.

CUNY’s culturally diverse students come from a multitude of backgrounds and lifestyles. As a result, no one strategy will serve all students at all times. While food pantries that send food home with students can be help those with the facilities and skills to store food and cook, other students may lack such resources. Many students are parts of multigenerational families, with responsibility for children and other family members, while others live by and care for only themselves. Assisting students who want to cook to have the skills and resources to do so is a valuable service, but it is also important to provide access to affordable and healthy prepared foods to students whose schedules or living arrangements do not permit them to cook. Sometimes nutritional advice that emphasizes cooking or generic recipes for health do not take sufficient consideration of the cultural variation in tastes, styles of food preparation and consumption of meals.

Our approach to achieving food security seeks to engage CUNY students in an inquiry-driven process of understanding the structural factors contributing to food insecurity, the cultural, economic, political and social resources they have available to address food insecurity and to motivate them to work toward ending food insecurity. Of course, not every student will choose to participate in this effort, but engaging CUNY students in learning about food security and acting to end it in our community is an appropriate and meaningful project for our university.

In developing a multi-year coordinated and comprehensive campaign to end food insecurity among our students, we need to be able to answer the following questions:

The CUNY Urban Food Policy Institute and Healthy CUNY acknowledge the financial support for the CUNY Campaign for Food Security from the Jewish Foundation for the Education of Women and the guidance and expertise of the staff of CUNY food pantries and Single Stop programs and the CUNY Office of Student Affairs. We especially thank Ronnette Cox for her contributions to this Guide and the faculty, staff and students at John Jay College and Hostos Community College for their active contributions to the Food Security Advocates at those campuses. We also recognize the continuing generous support for reducing food insecurity at CUNY from the Carroll and Milton Petrie Foundation. The content of this guide reflects the experience and judgement of its authors, not of the institutions that employ or fund us.