Barriers and Facilitators for Select Institutions 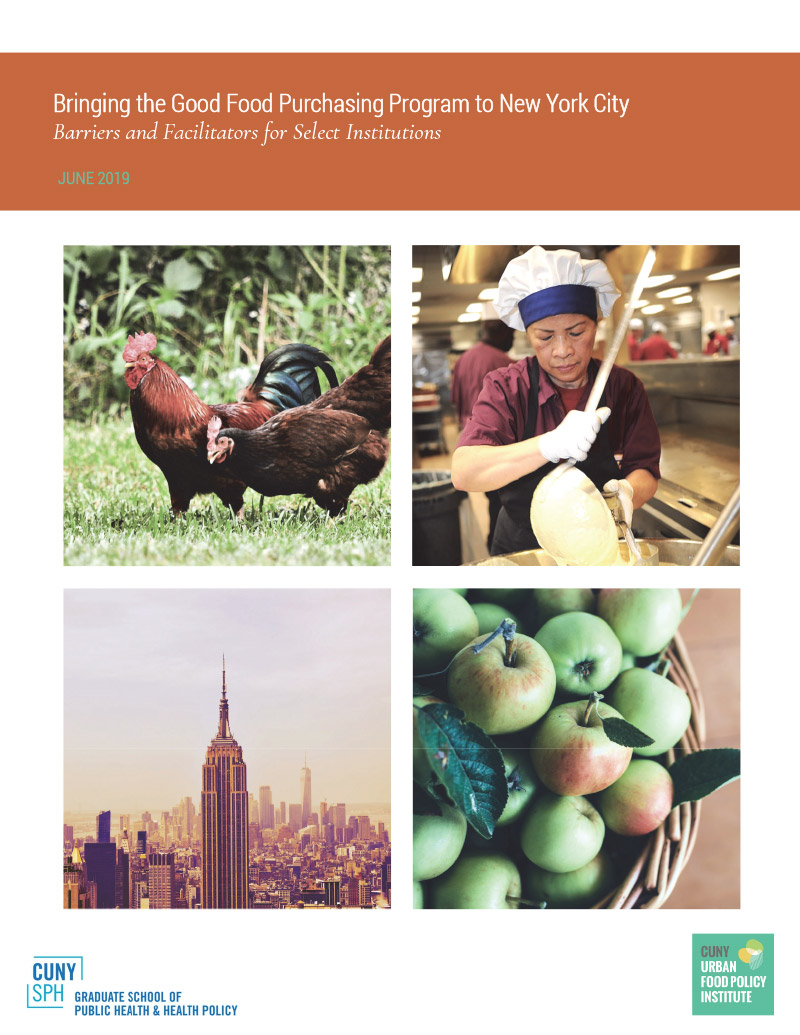 The Good Food Purchasing Program (GFPP) is a comprehensive effort to harness the power of municipal institutional food procurement to achieve social, environmental, and economic goals through the promotion of better food purchasing practices. Specifically, the program provides a metric-based, flexible framework that prioritizes five core values: local economies, environmental sustainability, valued workforce, animal welfare, and nutrition. With more than 100 national, state, and local food system experts providing recommendations and feedback on the policy, the GFPP is the first procurement model to support these five values in equal measure.

In 2012, Los Angeles became the first city to join the GFPP and subsequently other cities including San Francisco, Oakland, Boston, Chicago, Washington D.C., Cincinnati, and Austin approved the GFPP, as did several school systems, counties and regions. In New York City, several organizations including the Food Chain Workers Alliance, Community Food Advocates and the City University of New York (CUNY) Urban Food Policy Institute, and the national Center for Good Food Purchasing have joined forces to create the NYC Good Food Purchasing Campaign and to begin to build a coalition of local supporters.

In 2018, the Center for Good Food Purchasing initiated baseline assessments for the Department of Education (DOE) – the New York City’s largest institutional food purchaser, and NYC Health and Hospitals – the largest municipal hospital system in the country. The research presented in this summary complements these ongoing assessments by providing in-depth information about the processes of food procurement at two additional government agencies, the New York City Human Resources Administration (HRA) and the New York City Agency for Children’s Services (ACS). These two agencies were selected because of their reach among vulnerable populations and their complex relationships with hundreds of community-based organizations.

The report also explores how the GFPP might influence food procurement programs in the emergency food programs HRA funds and in the early care and education centers ACS supports and examines how adoption of the GFPP might affect those procurement processes. Researchers used a two-pronged data collection strategy combining qualitative case study data with quantitative data from procurement contracts and a survey of vendors. A case study research design was employed to develop an in-depth and comprehensive overview of institutional food procurement at select institutions in the City and to shed light on the barriers and facilitators to institutional commitment to the GFPP. Analysis of current NYC food procurement contracts at HRA and ACS – ascertained via FOIL requests and the NYC OpenData Portal – as well as a survey with the top twenty vendors supplying city agencies, based on the contract data previously explored, allowed for a preliminary assessment of the degree to which those vendors’ practices aligned with GFPP values.

Our case studies were based on interviews with 14 staff directly involved in food procurement through the two agencies and 5 staff members at other organizations who were not directly involved with either agency but were able to provide insight into certain aspects of procurement, including relevant policies and procedures. Overall, our case study research revealed divergent as well as overlapping barriers and facilitators to GFPP adoption at HRA and ACS. For the HRA and the emergency food programs they support, higher cost, the influence of federal regulations, and policy restrictions from state-level anti-hunger and nutrition programs were perceived as the main constraints to institutionalizing a holistic, value-based approach to food purchasing as represented by the GFPP. For the ACS and the early care and education centers it supports, the lack of infrastructure, the modest volume of purchases, and the limited information on the food procurement practices of similar institutions, were among the key barriers noted.

Of note, both early care centers and emergency food providers identified alignments between their existing procurement practices and the values GFPP promotes, an alignment that can support and expedite GFPP implementation after it is adopted. Additionally, both types of institutions noted that attaining greater economies of scale – either through the development of a collective purchasing model or by using the services of group purchasing organizations – can help reconcile financial viability with requirements for higher nutritional, environmental, and human and animal rights standards. Tools or resources that can help institutions to more easily identify GFPP-aligned vendors were another key facilitator for the GFPP implementation identified by case study participants.

As expected, the contract data analysis revealed the strategic importance of the NYC Department of Education in the NYC’s institutional procurement landscape – both for the scale of its purchases as well as its ability to simultaneously affect the well-being of future generations of New Yorkers and the resiliency of farmers and farmland in the region and elsewhere.

Equally important was the finding that more than half of the top 22 vendors, ranked by dollar amount, who contract with the City, supply agencies other than the DOE, including the HRA, ACS, and DOC. When DOE contracts are excluded, these City contracts total more than $62 million. This shows the potential for the municipal government to leverage its market power to improve food quality, lower costs, and promote agri-food systems that work in the public interest.

Survey data from the top 22 vendors revealed additional key findings including a significant alignment with the GFPP’s local economies value category. Of the fourteen vendors who took the survey, more than two thirds stated that they sourced products from local producers or manufacturers (i.e., within 250 miles for produce and 500 miles for meat). In most cases, this response was largely due to local food sourcing already playing an important part of the company’s policy or mission. Additionally, the majority of vendors who participated in the survey stated that they follow a social responsibility policy. However, only one agency used the Fairtrade certification as a criterion for sourcing food.

In a forthcoming report, Institute researchers will explore in further detail these and other findings to support the activities of the coalition campaigning for adoption of the GFPP in New York City. This coalition, led by the Food Chain Workers Alliance, Community Food Advocates, and the CUNY Urban Food Policy Institute, working together with many other organizations, is engaged in a robust set of advocacy efforts to see the GFPP implemented citywide. For that reason, we present the following recommendations outlined below.

For NYC Institutions and Agencies

Together, the lessons and recommendations from the case studies, contractual data, and vendor survey point to key areas for future scholarship on institutional food procurement as well as next steps for the GFPP Campaign currently underway in New York and other cities across the US. A better understanding of how public institutions procure food can aid the adoption of policies that could lead to the procurement of healthier, more sustainable foods being served in the public sector.

Many individuals and organizations contributed to this report. First, we would like to thank the 19 individuals from 12 organizations who agreed to be interviewed and the 14 food distribution and manufacturing companies who participated in the vendor survey for this report. Institute staff members who contributed to the report include Kylie Repasy, Rositsa T. Ilieva, and Craig Willingham, and research assistants Michal Konopka, Sarah Shapiro, Jing Ney Leong, and Danaldi Adames. We also thank Ribka Getachew, Director of NYC Good Food Purchasing Campaign at Community Food Advocates NYC, Suzanne Adely, Regional Organizer, Mid-Atlantic and New England at Food Chain Workers Alliance, Chloe Waterman, Senior Food Campaigner at Friends of the Earth, and John Stoddard, New England Regional Coordinator, Healthy Food in Health Care at Health Care Without Harm for their helpful comments and their presentations at our Forum on Equity and the Public Plate: How the Good Food Purchasing Program is helping to transform the way New York and other cities buy food. Additionally, we thank our colleagues from the Center for Good Food Purchasing who provided insight and expertise and our partners in the New York City Good Food Purchasing Campaign, the Food Chain Workers Alliance and Community Food Advocates. Finally, we are grateful to the American Society for the Prevention of Cruelty to Animals (ASPCA) and the NoVo Foundation for their support. This report reflects the interpretations and opinions of its authors not our reviewers, funders, or employers.