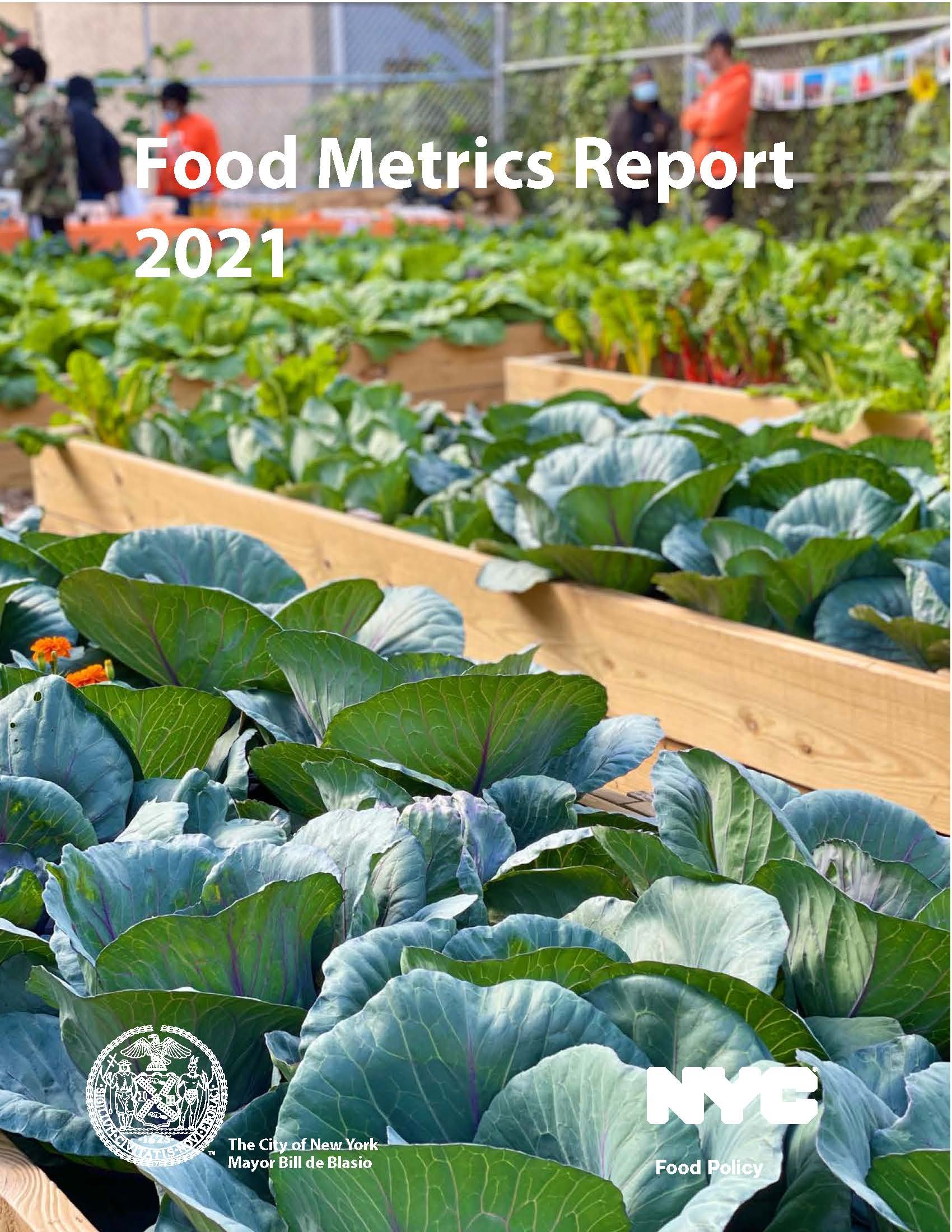 As we approach the third year of the COVID-19 pandemic, much has changed in the food policy world. Some of those changes are captured in the data presented in this report and some are not. With that in mind the staff of the CUNY Urban Food Policy Institute suggests some possible ways to expand and reinforce future metrics reporting in New York City.

Section 1 of the report focuses on food insecurity and documents the significant financial and human commitment by the City to support expanded food access initiatives to combat COVID-19 induced increases in food insecurity in NYC. Among these, we are particularly excited to note several investments with long term implications, including an increase to Emergency Food Assistance Program (EFAP) baseline funding (now $23.8 million annually), an additional $900k investment in equipment for emergency food providers, and another $600k for technology for city emergency food networks, all of which will contribute to long term system resilience and support efforts to combat food insecurity in the years to come. The launch and extension (through FY 2022) of the Pandemic-Food Reserve Emergency Distribution (P-FRED) program is also notable for its emphasis on increasing the distribution of fresh fruits and vegetables through NYC’s emergency food network, and we encourage the Adams administration to maintain and expand funding for this initiative. We note that the enhanced “Supply Gap” analysis, updated to include COVID-specific measures, is a good resource for informing policymakers and food distributors about where additional food is needed. In 2022 and beyond, the Adams administration should aim to provide comparable neighborhood level data related to SNAP eligibility at the community district scale to enable city officials and food advocates to better tailor direct services to increase participation. This approach would serve to highlight the effects of policies on enrollment. We’ve called for similar efforts in years past – and echo this notion again – in the hope that the technological support applied to the Supply Gap data in 2021 could be replicated to increase SNAP enrollment granularity in the coming year.

New York City undertakes an enormous effort to feed millions of New Yorkers and should be applauded for its commitment to food security. Several aspects of the City’s activity in this area are captured in Section 2 of the Food Metric Report which provides an overview of progress made towards improving city food procurement and service. A major achievement in food policy over the last 15 years has been the adoption of agency standards for meals/snacks purchased and served and according to this year’s report the number of meals meeting this requirement is down from an average of 230 million to 151 million from July 2020 to June 2021. This is due in large part to the pandemic. While this dip is to be expected it also doesn’t tell the whole story. 225 Million meals were served throughout the pandemic using the emergency feeding program known as GetFoodNYC, and those meals are not represented in the report, so it is unclear what percentage met city nutrition standards. Moreover, there was criticism from clients early on reflecting a dissatisfaction with the quality of those meals during the initial roll out and the Food Metrics Report does not provide an indication of how that satisfaction may have changed over time. Having data to reflect the activity related to GetFoodNYC would help readers gain a clearer understanding of the success and/or challenges of current food procurement efforts.

Additionally, this section also covers the City’s attempt to use the Good Food Purchasing Program standards to improve its procurement efforts. New York has made great strides in transitioning towards a values-based procurement approach and has the potential to be a national model for how to use public dollars to support good actors in the food system. However, to ensure greater transparency on food procurement performance, GFPP standards data should be part of the City’s Food Metrics Report. Baseline GFPP performance data was collected from half a dozen agencies in 2019. Collecting and publishing that data annually in the Food Metrics report would help provide a window into progress being made to improve procurement in the City.

In Section 3 where the report discusses the need for increasing healthy food awareness and access, two specific indicators are used to understand the success of city sponsored and city supported programs: Fruit and Vegetable Consumption and Sugary Drink Consumption. Comparing data from 2016 through 2021, fruit and vegetable consumption has stayed the same with regards to mean servings of adult New Yorkers. Moreover, with cost still being the main barrier to healthy food access, those living in the highest income households (400% and above over the Federal Poverty Line), had significantly higher consumption of fruits and vegetables.

To combat some of the barriers to healthy food awareness and access, the city has continued to implement programs that focus on particular populations throughout the five boroughs. Efforts like farmers market-based nutrition education programs, childcare-based programs, and nutrition programs for the elderly, have found success in raising awareness regarding healthy eating habits among different populations. Increasing access to more fruits and vegetables through programs like Health Bucks, Green Carts and Get the Good Stuff, puts the equivalent of millions of dollars’ worth of healthy foods into the hands of those who need it.

Lastly, the high cost of fruits and vegetables is consistently cited by New Yorkers as one of the main barriers to healthy eating. More city run and supported programs to help address this barrier should be the focus of renewed investments in food access interventions. Furthermore, more should be done to alleviate the drivers of sugary drink consumption, like targeted marketing to vulnerable New Yorkers, as part of a comprehensive strategy to improve the diets of city residents.

Section 4 of the Food Metrics tracks efforts to support a just and sustainable food system, including policies to support regional and urban growers and local food manufacturers. It also contains information on programs that beneficially reuse organic matter, the largest segment of the city’s waste stream. Several of these metrics raise important policy questions.

The NYC Watershed Agricultural Program, an initiative involving several of the City’s watershed partners, supports whole farm plans and best management practices for farms and private forests near the city’s drinking water reservoirs, contributing to farm viability and water quality. But the pandemic has threatened farmland by directly affecting farm revenue and by increasing land prices as people relocate to exurban and rural communities. In some watershed communities, the pandemic resulted in a 25% increase in population as New Yorkers fled to second homes. The data presented in the Food Metrics report fails to capture these trends. Analyzing how they affect farmland loss and raise barriers to entry of younger and BIPOC farmers is critical to assessing sustainability of the region’s agriculture.

Additionally, the report presents the number of community gardens managed by the city’s GreenThumb program, school gardens operated by GrowNYC, and Farms at NYCHA, large farms located in 7 public housing developments. Missing from the data are the many nonprofit-run community farms, school gardens not affiliated with GrowNYC, hundreds of resident-led gardens at NYCHA developments, and a growing number of commercial farms and related businesses that provide jobs and high value produce for restaurants and consumers. With the enactment of Local Law 123, which establishes an urban agriculture office and advisory board, more comprehensive data on what Mayor Adams has called the “new agrarian economy” should be included in next year’s food metrics report.

Finally, the report’s metrics on job creation in the food sector focuses on public support for food manufacturing, entrepreneurship, and help for restaurants hurt by the pandemic. But given the pandemic’s outsized effects on food service jobs in the leisure and hospitality sector, which lost 62% of total employment (286,000 jobs) at the start of the pandemic, metrics on the recovery in food jobs are conspicuously absent. A recent report by the Independent Budget Office estimates that since the start of 2020, this sector reached 66% of its pre-pandemic employment and will only be at 86.1% of 2020 levels by 2025.