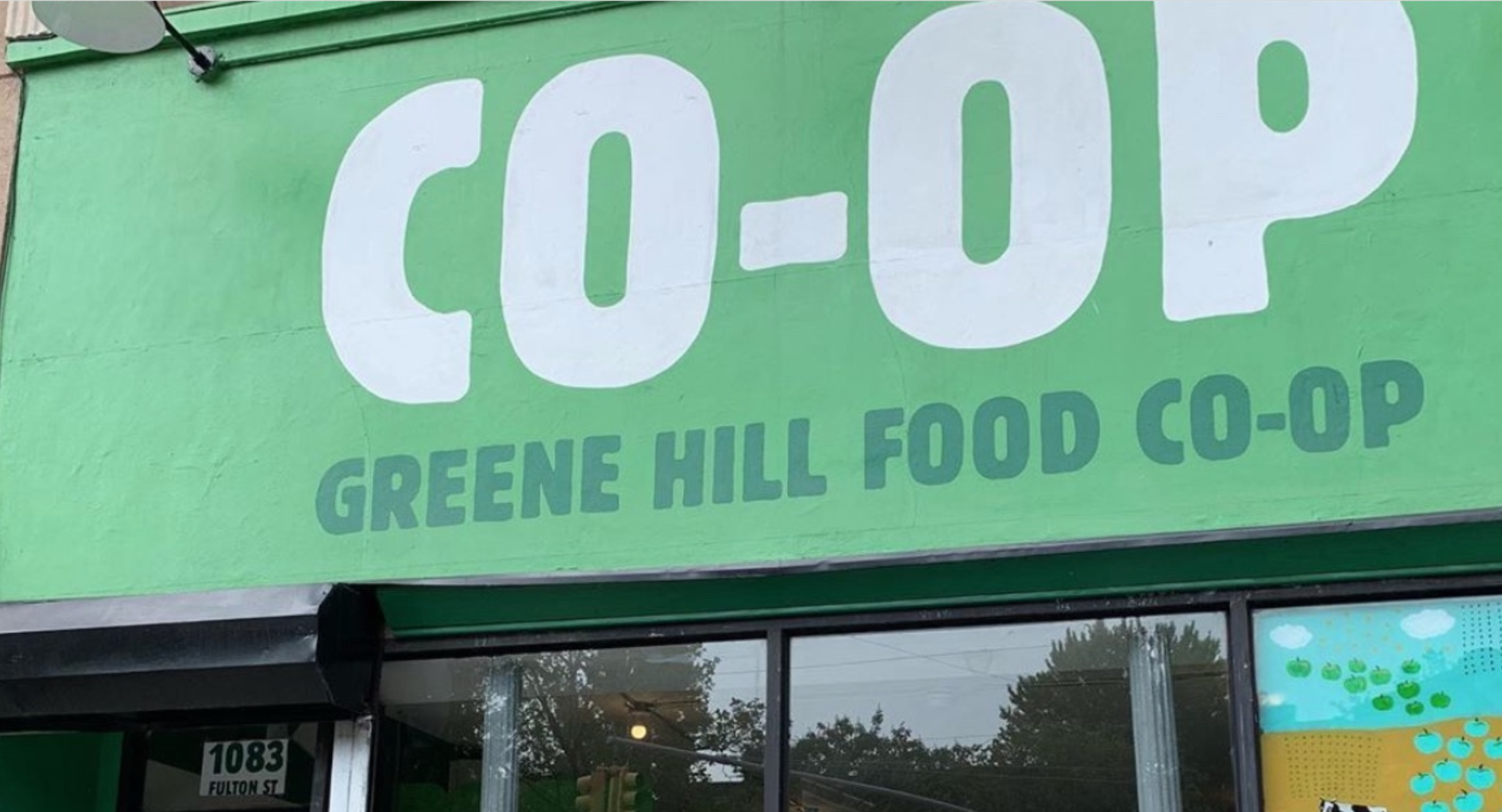 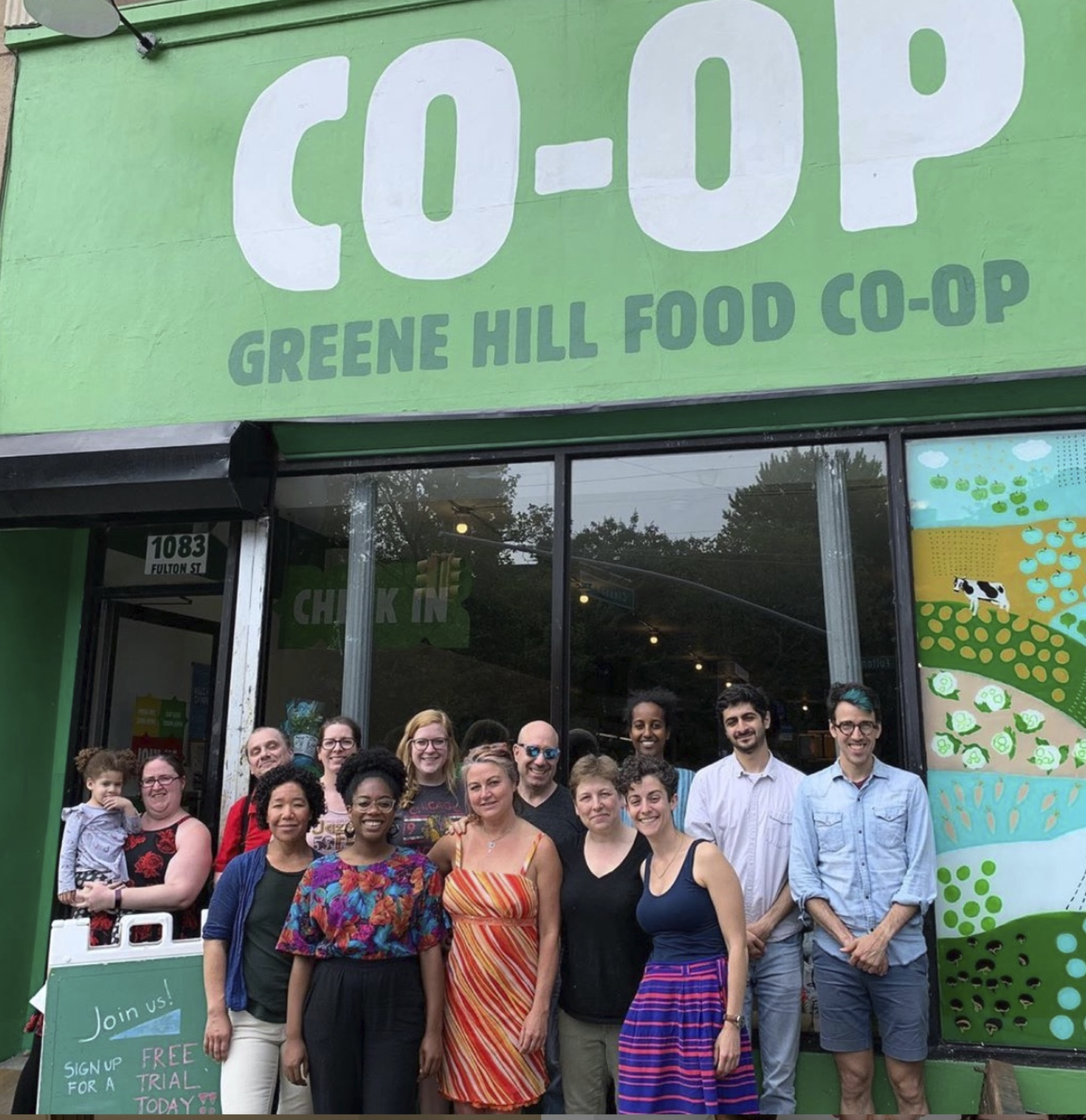 Ivonne Quiroz (IQ): What are some of the major differences between the cooperatives and how they operate?

Cheyenna Weber (CW): A co-op is an entity that is owned and managed by its members to meet material needs and which abides by the International Cooperative Principles. You can have a co-op for just about anything. Their main purpose is self-help, a sustainable and long-term mutual aid that helps people get what they need, whether that’s groceries, access to tools and processing equipment for farmers, or lines of credit for new food co-ops. The beauty of a co-op is that it’s designed to serve the people who are using it.

In NYC our food co-ops are unique, because the majority of them are member-only and member-owners are expected to put in time working at the store each month. This is called a member labor model, and it’s different from most food co-ops nationally that are staffed by professionals and members don’t do any of the labor. Retail stores like food co-ops are called consumer co-operatives, because consumers are the owners.

Worker co-ops are owned and managed by the workers. In NYC they cover a range of industries, including food. Brooklyn Packers is an example of a food industry worker co-op.

We also have agricultural producer co-ops that are active here, such as Cabot Creamery, which sells upstate dairy products to city residents.

In the solidarity economy framework, it’s not just co-ops. There are other kinds of entities that can use cooperation and mutualism, but they’re not based on the seven cooperative international principles. For Solidarity Economy food system work, this includes community gardens and community land trusts, as well as CSAs, community supported agriculture.

IQ: What do you see as the greatest challenge to establishing new food co-ops and sustaining them?

CW: They have different needs, but I can say that everybody’s in a state of struggle with the pandemic. A number of the startup food co-ops have the same problem as any other small businesses have: the rent is too high. I was talking to somebody from Bushwick Food Coop last week, and they were expressing frustration with the tax burden, which they felt didn’t acknowledge their social mission. All we’re trying to do is bring healthy, fresh, local food into our neighborhood. Why are we taxed in the same way as a WholeFoods that exists only to make a profit for shareholders? If you have a social purpose, should you be given some sort of tax relief, rent relief, anything like that? Such provisions would help, especially for co-ops in industries like grocery, where it is a cut throat race to the bottom that harms workers, farmers, and the land. A great book about the industry, and what co-ops are up against, is Grocery Story: The Promise of Food Co-ops in the Age of Grocery Giants, if folks want to learn more.

IQ: How have you seen different types of Co-Ops meet the needs of community for food access, before COVID and then during COVID?

CW: The seven cooperative principles include Concern for Community. That extends not only to the people that are part of the co-op, but the people who are around or outside the co-op, the larger community of the co-op. Many co-ops have been responsive to the significant spike in food access needs during the pandemic. For example, Windsor Terrace Food Coop partnered with their local mutual aid group for joint food buying, helping move food into the community. Greene Hill Food Coop has a relationship with a community fridge and so now what they don’t sell goes to the community fridge. Pre-pandemic, Park Slope Food Co-op has for many years donated food to their local soup kitchen and shelter, CHIPS, and most of the co-ops have worked to address inequity by investing in the equipment to run EBT and developing sliding scale or low-income memberships that include a smaller member financial investment. There is always more to do, however, because our food system is designed for profit, rather than meeting community food access.

IQ: What would it take, in your opinion, to scale up the existing network of food co-ops in New York?

CW: To be honest with you, I’m pretty worried about the food co-ops in New York right now., including my own. Park Slope, which has been the most financially successful and had the largest membership (17,000 people pre-pandemic), even nationally standing out for its 40 years of longevity, has gone from 16,000 transactions a week to only 7000. It’s not clear if people moved away or are they just shopping elsewhere. Are people using delivery? At Park Slope we’re not moving enough food to cover our cost, partly because staffing costs went way up at the same time that we started selling less food. This is because we discontinued our member labor program. Park Slope is surviving because of PPP loans right now. And that’s just one example. Most of the food co-ops are facing issues of volunteer burnout, membership turnover, and disruption of their business activities. When you talk about thriving and scaling, to be honest with you, I’m concerned about us just holding on to what we’ve got. They need immediate support. They need financing. They need rent relief. They need affordable healthcare. (Cooperative Economics Alliance of NYC actually supports the NY Health Act for this reason.) They need the same things that other small businesses or traditional businesses need right now. The city has also been very willing to support larger businesses, like Amazon, to move here and take advantage of many forms of support. I could imagine there being some kind of cooperative warehouse or food hub or something that is catering to us in a way that would allow us to build some of our infrastructure, if the city really wanted us to have a cooperative and just food system.

IQ: What are some key actions or policies that you think could help a food co-op continue to operate and serve their surrounding communities? Any actions that people could take beyond just shopping at these places?

CW: Definitely becoming a member helps, that’s appreciated, at the individual level. Join a co-op and get involved. Get involved on the board. Get involved on one of the committees to show up and help improve the point-of-sale system. Help expand access to low-income people in the neighborhood. Make sure that the EBT machines function. All of those things need to happen. [Co-ops] run different kinds of investment campaigns to capitalize these ventures, so people who have the money should definitely participate in that way, if they can. I think that food co-ops have a bit of a reputation also as being like a crunchy sort of white hippie thing, which is not undeserved to some extent given the 1970s embrace of natural foods, but there’s also a rich history of Black cooperatives in this city, as well as other places around the country. I think folks really should, if they’re interested in supporting co-ops, learn that history. A great book about that is Collective Courage by Dr. Jessica Gordon Nembhard. That’s a great place to start.

IQ: Do you know of any policies that are coming that people can support?

CW: Not for food co-ops. Right now, it’s pretty much every kind of co-op has its own policymaking agenda. They’re working in a fractured policy environment in every way, so worker co-ops do their own advocacy, food co-ops reach out to their own electeds, etc. It’s interesting that the worker co-ops are the co-op of the moment and that is the sector the City Council is funding and listening to. Food co-ops are being ignored— they last got support from City Council when Christine Quinn was speaker. Part of the reason is that they don’t have their own association that is their political voice— and the worker co-ops do. Certainly, community gardeners regularly put forth policies and demands on the city, and folks can and should tune into those and support them. Gardens are essential agriculture for many communities, especially communities of color, and they’re often pitted against other community needs, like affordable housing, unfairly.

When I think about supporting food co-ops, I think about the whole food chain and changes that can be made at any point in that system that will support the food co-ops. Because the food co-ops don’t exist to make a profit, they exist to bring good food to people so anything we’re doing to preserve farmland and to make sure that Black and Indigenous folks are getting access to farmland and anything that we can do to improve the wages of grocery workers, or reduce carbon in our distribution system, these sorts of policies can help food co-ops. Any pressure we can put on the grocery industry to abide by its own regulations and to protect workers and the land help co-ops by leveling the playing field.

IQ: Is there anything else that we haven’t touched upon that you think would be super important to share that I haven’t asked about?

CW: I would just say the solidarity economy plug. It is CSA season so people should be signing up. If folks haven’t signed up yet, they should. Just Food has a wonderful map of all the CSAs so go get on it before it’s too late. I do like to highlight that community gardens are part of the food system too and they’re also doing really good work so even though I know we’re talking about the food co-ops, I just appreciate that their mutual aid efforts get mentioned and they get a little bit of attention too. A great example of mutual aid during the pandemic is Phoenix Community Garden, where they’ve gone out of their way to ensure food access for elders of color. Support these folks, they are what make New York great!

IQ: I just want to thank you so much. This was really great.