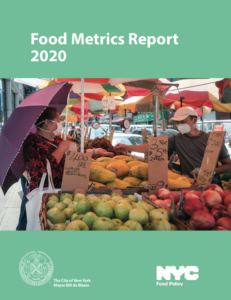 In 2011, the New York City Council passed, and the Mayor signed, Local Law 52 that required the Mayor’s Office to prepare each year a Food Metrics Report for New York City listing the performance and accomplishments of several city food programs. Earlier in January, the Mayor’s Office of Food Policy released the 2020 Food Metrics Report, the ninth report since the first in 2012. Producing a report in the midst of the pandemic is an especially impressive accomplishment and this year’s statement included descriptions of many of the new programs the city has launched to address the food impact of the pandemic.

Next year will mark a full 10 years of food metrics reporting in NYC, making this a good time to take a step back to ask how the reporting process can be modified for the next decade to better contribute to making the city’s food system more equitable, sustainable, thriving, and nourishing. In the spirit of making the annual report a more useful tool in the coming years, the staff of the CUNY Urban Food Policy Institute suggests possible directions for future metrics reporting in New York City.

The introduction to the 2020 report acknowledges that it captures outputs and not outcomes, a consequence of the original City Council legislation. But we desperately need better data from the city on the impact of its programs. Unless we know how many people have been moved out of food insecurity every year, how rates of child and adult obesity have changed, how premature deaths from diabetes have varied, we can’t assess the progress of the city’s many food programs or their role in shrinking the glaring racial/ethnic and economic inequities in food related problems. Measuring outcomes such as these will also benefit the city agencies responsible for executing some of the most progressive food policies and programs in the nation. Documenting the positive impact of these efforts shines a spotlight on the tremendous effort the city is making to combat food insecurity for New Yorkers and raises the bar for other municipal governments. In the coming years, let’s together identify the outcomes that will make a difference, allocate sufficient funding and human capacity to assess these outcomes, and begin measuring and reporting progress on them.

SNAP is an essential federal food benefit that supported 1.5 million New Yorkers in October 2019, and an additional 200,000 a year later as the pandemic increased hunger and food insecurity. As the Food Metrics report explains, the city has implemented new programs to help eligible seniors enroll in SNAP, boosting their participation to 72.9% compared to 48% nationally. Increased public education about SNAP, including targeted outreach to organizations serving specific populations, combined with a mobile app to ease the application and recertification process, has increased enrollment among those eligible. In future reports, providing disaggregated SNAP enrollment data at the community district scale, combined with estimates of the eligible population (based on the number of low-income individuals in each community), would reveal neighborhoods that are under-enrolled, i.e., where the likely SNAP-eligible population exceeds the number participating in the program. This would enable city officials and food advocates to better tailor direct services to increase participation and would highlight the effects of policies on enrollment, like the Trump administration’s public charge rule’s dampening of participation by immigrant neighborhoods or the new rules easing eligibility and benefits.

The New York City Department of Health and Mental Hygiene’s nutrition education and food access programs were created with the goal of promoting health and making it easier for New Yorkers to find healthier foods. Over the years, these programs have evolved and increased healthy food access in some of NYC’s most under-served communities. The Food Metrics Report clearly indicates how these programs have improved food access in underserved communities. However, in the future, it could also assess their cumulative impact on the nutritional health of New York City residents, especially those who live in under-served communities. Knowing whether some programs (e.g., Health Bucks or FRESH or Green Carts) do more to improve nutrition than others or in some communities more than others, could help the city to decide which programs to scale up and which to scale back and which to match to specific community needs. Such a tailored evidence-based approach could help the city make more substantial progress in reaching its food goals.

In the future, using the Food Metrics Report to educate New York residents and policy makers about the costs and benefits of further investments in expanding SNAP fruit and vegetable incentives or other programs could help inform public discussion on food policy. For example, investing more in Health Bucks in New York City could be one avenue for advancing both nutrition equity and resilient regional foodsheds. The 2020 NYC Food Metrics report indicates that, in 2019, the Health Bucks program continued to expand its reach recording a 24% increase ($1.15 million vs. $926,000) in the number of Health Bucks distributed through farmers markets, CBOs, and pharmacies. However, this investment remains a tiny fraction of the city’s food economy and the city’s food budget. In the wake of the COVID-19 pandemic’s catastrophic impact on food security and healthy food access in the city, NYC government will need to scale up programs to reverse the increases in food insecurity and possible deteriorations in diet quality (the evidence on this is uncertain as of now). What would be the benefit of investing another $20 million in Health Bucks? How would the benefits and costs of that investment compare with subsidizing new supermarkets or improving school food? If residents and policy makers are to be engaged in shaping city food policy, they will need such evidence to make informed decisions.