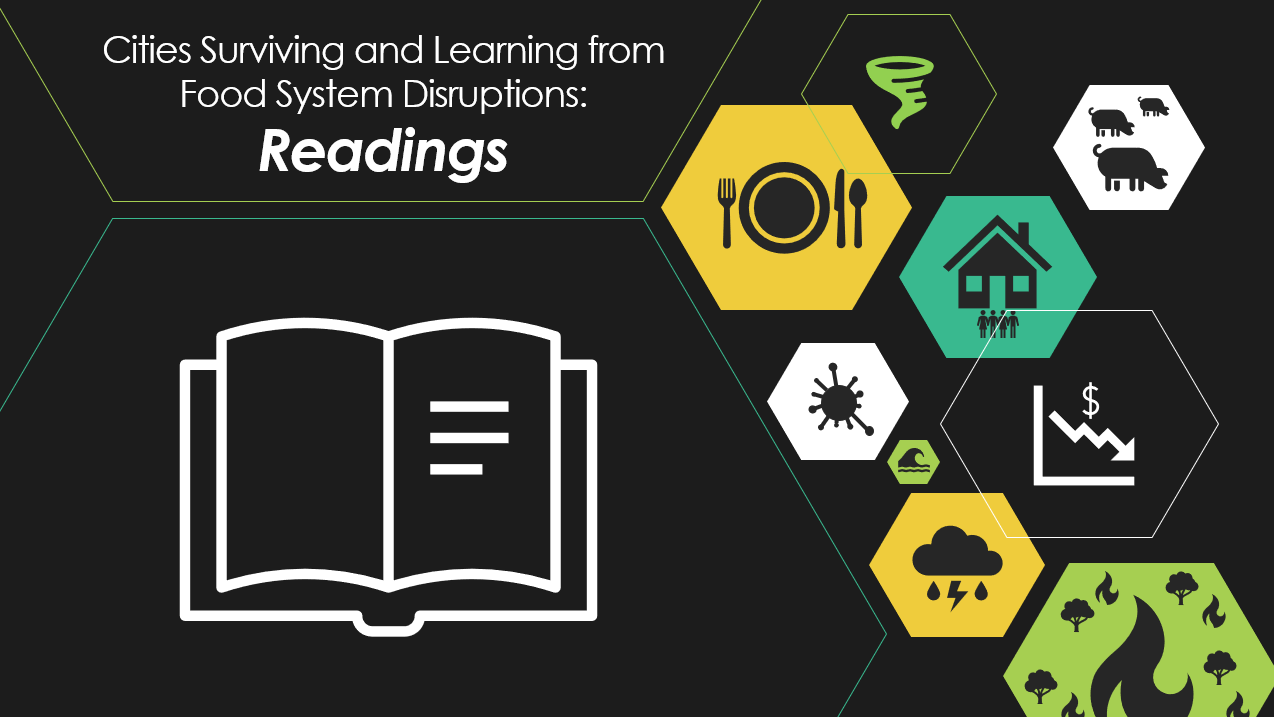 In preparation for this month’s urban food policy forum focusing on cities, disaster response and community resiliency and resistance in times of crisis, CUNY Urban Food Policy Institute staff compiled a list of selected readings. These analyses reflect on how major economic, public health, and environmental crises have influenced the urban food system in the past and how government and community-led initiatives have responded. Our goal: identify some lessons that can help New York and other cities find their way out of the burdens imposed by the COVID-19 epidemic and, in the process, ameliorate deep-seated food system problems.

From the Introduction of “Breadlines Knee-Deep in Wheat”: “For the American farmer, 1932 was a year of singular misfortune,” reported the New York Times on New Year’s Day, 1933. Between January and mid December, average farm prices had fallen by more than 18 percent, following a drop of nearly 50 percent in the two previous years. Two days later, a more detailed report on farm prices predicted a continuation of the rock bottom levels: “The huge surpluses of leading agricultural products that have been accumulated during the last few years are expected generally to preclude more than a moderate recovery in prices in 1933, even if there should be a decided falling off in production.” On the same day, according to another Times report, a leading New York social worker told a Senate committee that relief agencies were losing their battle to prevent starvation. “Deaths due to insufficient food have been reported in several cities,” declared H. L. Lurie on behalf of the American Association of Social Workers, and he warned of possible violence by the unemployed if adequate relief measures were not taken. […]

Read the Introduction at Google Books:

From Chapter 2 of “Beyond the Kale”: […] During the Great Depression, the federal Works Progress Administration sponsored relief gardens for food production in urban areas, but these programs were also abandoned after the federal government adopted the Food Stamp Program for farm surplus in 1937 (ibid.). Livestock were still present in urban areas in limited numbers until the 1930s, though they were used more for aesthetic purposes and landscaping than for human sustenance. Indeed, sheep were kept on lawns at the White House during the Wilson Administration, and in New York City’s Central Park, until 1934 (Blecha 2007, 14–15). […]

From Chapter 8 of “Integrated Urban Agriculture”: Historically, economic downturns have prompted cities to support urban agriculture to enable people to supplement their diets and to provide low-cost stewardship of vacant spaces (Lawson 2005). As in previous periods of economic crisis, the global financial meltdown of 2007 and the ensuing ‘great recession’ have also contributed to the recent growth in urban agriculture activity and the implementation of supportive municipal policies. A number of cities have revised zoning ordinances to accommodate agriculture, adopted local laws and regulations which make it easier to farm, and have made organizational changes within government to integrate urban agriculture more fully into agency procedures and the city’s physical landscape (Cohen 2012). One of the key questions for policymakers is whether the burst of interest in urban agriculture will endure, or whether the attention to the issue will wane when the economy rebounds. This chapter argues that the urban agriculture policies, governance structures, and physical changes created in response to and shaped by the financial crisis make it likely that urban agriculture will remain as much a part of the city’s political and physical landscape as conventional systems of water and sewage, sanitation, transportation, parks, and housing. […]

The full Chapter 8 is available at besturbanagriculturebook.com

From the Book Review of “Stirrings”: Founded at the height of the AIDS epidemic, in 1986, the organization [God’s Love We Deliver] had a simple mission: to provide healthy, high-quality meals at no cost to those who were ill and homebound. In 2020, it is hard to imagine that feeding people with AIDS would be considered a radical act, but in the 1980s people with AIDS had been abandoned by family and friends, ostracized by their churches and workplaces, and ignored by governments. While activist groups like Act-Up were staging die-ins at Saint Patrick’s Cathedral and occupying the Centers for Disease Control, God’s Love enrolled a broader range of people who wanted to donate their time, skills, and resources to fill a basic human need. […]

Hurricanes or superstorms have greatly impacted New Orleans and New York City. Hurricane Katrina in New Orleans and Superstorm Sandy in New York City provide us with an opportunity to analyze the actual impact of a natural disaster. We learn from Katrina and Sandy that delayed or inadequate insurance and government assistance payments can hold up the reopening of smaller grocery and corner stores, adding another layer of food availability vulnerability. In the aftermath of Sandy, both the City and State launched new low-interest loan programs to assist small businesses in need of financial assistance. The State’s Small Business Recovery Loan Fund was activated less than a month after Sandy and the City’s Hurricane Sandy Business Loan and Grant Recovery Program was launched seven months after the storm. In New Orleans and Southern Louisiana research found that small businesses impacted by Hurricane Katrina had not adequately planned for a disaster and did not have access to sufficient capital for recovery, causing a severe shortage of food that lasted many months. Moreover, in New York City Superstorm Sandy highlighted how existing federal programs that address food insecurity may be insufficient and may not be flexible enough to respond to limited food supply in the aftermath of a disaster, exacerbating food access issues during a time of crisis.