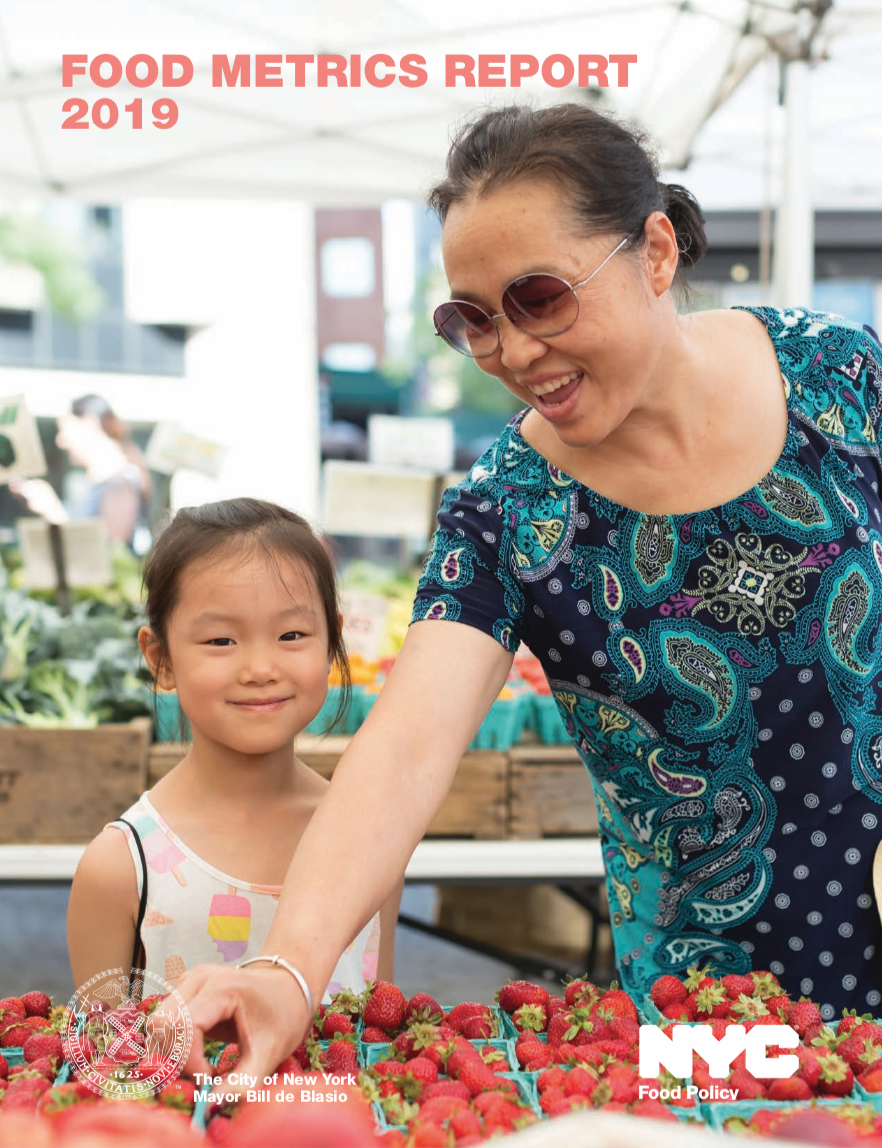 On December 18, 2019 the Mayors’ Office of Food Policy released its 8th annual Food Metrics Report. The report tracks city performance in multiple food system domains — from support for sustainable farming in the regional watershed, to urban agriculture, food security, healthy nutrition, food retail, workforce development, and food waste. Over the years, the number and variety of metrics reported has expanded beyond those mandated by the original legislation. Reporting requirements for the urban food system in New York City were codified in 2011 (following the city’s first comprehensive food agenda FoodWorks in 2010) when the City Council passed, and the Mayor signed, Local Law 52.

Compared to 2018 data, evidence in the 2019 report reveals positive developments and, in some instances sustained expansion, for several city food programs from farm to fork. Among these are the following seven:

Other programs that grew in 2019 are DOE’s Garden to Café Program, the NYCHA’s Food Business Pathways Program, Farms at NYCHA in partnership with Green City Force, and DOE’s Breakfast in the Classroom program.

Importantly, the report also highlights a modest drop of 0.6% in the proportion of New Yorkers who were food insecure in 2017 compared to 2016. A closer look at the Borough-level data, however, also indicates that the change has been uneven — the lowest drop in food insecurity was observed in the Bronx (-0.1%) whereas the highest, was in Brooklyn (-1.1%). While these differences warrant further research, they are also indicative of the importance of joined-up, cross-agency city policies, including those promoting access to affordable housing and living wage jobs as well as curbing gentrification, to elevate and support the work of the Mayor’s Office of Food Policy and the New York City Council’s efforts in Growing Food Equity in 2020 and in the next decade.

While most metrics indicated expansion of existing programs there were a few that exhibited slight contractions. Compared to 2018, there was a slight decrease — but still with totals above 2012 levels — in the number of salad bars in public schools, the number of registered community gardens, and the amount of DOE dollars spent on local milk, yogurt, and produce. One program that has been consistently declining since 2012 is the Green Cart program, which in 2019 saw 20 fewer active permits compared to 2018. The only metric that dropped to zero from 2018 levels was the number food-related job training programs administered by Small Business Services, which weren’t carried out last year. Another change that will continue going forward, pertains to the NYCEDC FRESH program which, from now on, will report only stores that received financial incentives and leave out those with only zoning incentives.

An important metric not required by the local law, but included in the 2019 report, is sugary drink consumption; an indicator that measures the percent of adult New Yorkers who consume one or more sugary drinks per day. Back in 2015 when the city’s Department of Health and Mental Hygiene launched “Take Care New York 2020” (TCNY) — a strategy to improve the health of all New Yorkers and advance health equity — it also set a target to bring this indicator down to 19% by 2020.

While the indicator has dropped by as much as 12% between 2007 and 2018 (from 36% to 24%), and we are just 5% away from the TCNY target, the progress has stagnated in the period 2015-2018 (plateauing at 24%) and the prevalence continues to be higher among Black and Latino New Yorkers. In a new study on predatory food and beverage marketing the CUNY Urban Food Policy Institute, with support from the New York City Mayor’s Office for Economic Opportunity (NYC Opportunity), outlines some of the structural reasons for these persisting disparities and proposes strategies how to address them both through community leadership and policy levers. Read the overview of study here.

The role of metrics in food policy: Lessons from a decade of experience in New York City, a recent publication by the CUNY Urban Food Policy Institute provides, a more detailed analysis and critique of the Food Policy Metrics process from 2012 to 2018. It can be found here.