The Trump administration is wearing me out. Every time I turn around, there is another egregious proposal from the Department of Agriculture’s Food and Nutrition Service [FNS] to remove people from SNAP or cut their benefits. I think I am suffering from comment fatigue. With each successive proposed rule change, my comments have grown shorter and less technical, with fewer citations. Nevertheless, I continue to submit them.

Perhaps I’ve given up the fantasy that anything I say might actually influence the choices made by FNS, but I know that it is essential to say something in the face of these attempts to reduce the nation’s commitment to helping low income people secure adequate food. 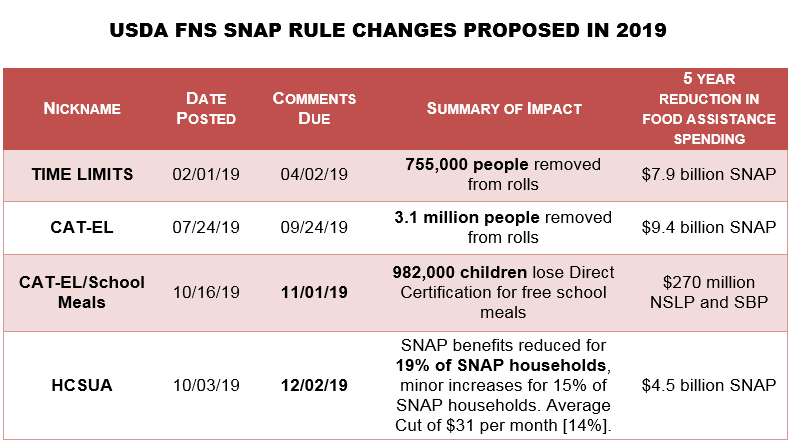 TIME LIMITS. Technically called Supplemental Nutrition Assistance Program Requirements for Able Bodied Adults Without Dependents. This rule change limited the criteria under which USDA would grant waivers that allowed the states to exempt able-bodied adults without dependents from the requirement of 20 hours per week of work. USDA predicted that 755,000 current recipients would lose their benefits, and total SNAP spending would be reduced by $7.9 billion over five years. By the time the comment period ended in April, USDA had received more than 100,000 comments, mostly in opposition. USDA has not yet released the Final Rule, but it is currently pending at the Office of Management and Budget.

CAT-EL. Technically, Revision of Categorical Eligibility in the Supplemental Nutrition Assistance Program, proposed to restrict the use of broad-based Categorical Eligibility (Cat-El). Current Categorical Eligibility rules allow states to substitute the assets test and income eligibility of the TANF and or Medicaid programs for those in the SNAP law, up to an income ceiling of 200 % of the federal poverty line. In order to receive SNAP benefits, households must have deductible expenses that bring their disposable income down below the poverty line, so Cat-El has primarily benefitted people in very high cost of living areas. This change was estimated to terminate eligibility for 3.1 million people, increase the administrative burden for states and applicants, and reduce SNAP expenditures by $9.4 billion over five years. When the comment period ended on September 24, USDA had received more than 127,000 comments, overwhelmingly opposing the change.

CAT-EL/SCHOOL MEALS. Technically, Categorical Eligibility in the Supplemental Nutrition Assistance Program: Reopening of the Comment Period. The USDA’s impact statement published, as required by law, in support to the CAT-El proposal, ignored the impact on eligibility for free school meals through direct certification of children in SNAP households, a fact pointed out by advocates and members of Congress. In response, USDA has released a revised calculation of the impact on access to free school meals, finding that nearly a million children would lose direct certification. Of these, about 40,000 children would lose eligibility altogether; 445,000 would move from Free to the Reduced Price category, and 497,000 would remain eligible for free school meals. Both those still eligible for free meals, and those eligible for reduced price meals would now be subject to the cumbersome and error-prone household application process. As a result, although the basic comment period closed in late September, USDA has re-opened the comment period until November 1 for comments dealing specifically with the impact on school meals and community eligibility. Both individuals and organizations that have previously commented on the basic proposal, and those who have not, may now comment on the implications for school food.

HCSUA. Technically, Supplemental Nutrition Assistance Program: Standardization of State Heating and Cooling Standard Utility Allowances. FNS proposes to impose a single standard method, to be used by all states in establishing a Standard Utility Allowance or SUA for use in calculating SNAP benefits. Current law allows states some flexibility in both the method of calculation and the sources of data, This proposed change would have limited effect upon eligibility-about 8,000 households would lose benefits altogether- but it would reduce benefits for an estimated 19 % of current SNAP households, while raising benefits modestly for about 15 % of households. The average cut would be about $31 per month or 14 %, and the total reduction in SNAP benefits would be 4.5 billion over five years. The anticipated benefit reductions vary greatly by state. In 16 states, at least 40 per cent of households would see a cut, and the State of New York would no longer be permitted to use different standard utility allowances (SUA) for different areas of the state. Comments on this proposal are due by December 2, more than a month away, but a month that is especially busy for people in the wider anti-hunger community, as the season of year-end appeals for donations begins with Thanksgiving food drives.

In case you, too, are tempted to pass up the opportunity to comment, here are some arguments to encourage you to take up your pen or open your laptop and exercise your right to input into the regulatory process.

1. While each individual cut may appear modest, taken together, these cuts are substantial. The proposed reductions in SNAP expenditures total close to 22 billion over the next five years. That is nearly 7% of the SNAP expenditures projected under current law. [1]

2. Some states, including our own State of New York, will be hit particularly hard. In New York, more than 30 % of SNAP households would see reduced benefits under the SUA proposal, resulting in a net loss to the state of 7.82 % of benefits, and 112,646 SNAP households will lose an average of $178 per month under the proposed Categorical Eligibility revision, a direct loss of $20 million per month to the state’s economy,[2] and an indirect loss of somewhere between $360 million and $432 million per year, based on studies of the SNAP multiplier effect.

3. Raising our voices makes a difference. The fight against these rule changes does not stop with USDA’s required reading of all comments. Many administration rule changes have been successfully challenged in court, and the volume and substance of public comments can provide a basis for a court to determine that a rule change is “Arbitrary and Capricious,” one of the bases for issuing an injunction. In mid-October five federal judges struck down the administration’s public charge rule, three of them citing the “arbitrary and capricious” nature of the rule as their reason. [3]

3. Advocates have made commenting easier. The volume of comments counts, so if you don’t have time to craft an individual comment from “scratch,” adapt one of the templates available on the websites of major advocacy groups. You can find FRAC’s page for commenting on the impact of the Cat-El proposed rule on school meal access here and its template for commenting on the Standard Utility Allowance here. You can find one developed by a coalition called “Hands Off SNAP” here. For HCSUA, see the template by Feeding America at this link and the active campaign here.

4. It is the right thing to do. We cannot be silent while SNAP, which Peter Edelman once called “the safety net under the safety net,” is shredded. [4]

If you prefer to write independently, FNS provides the following invitation:

“The Food and Nutrition Service, USDA, invites interested persons to submit written comments on this proposed rule. Comments may be submitted in writing by one of the following methods:

All written comments submitted in response to this proposed rule will be included in the record and will be made available to the public. Please be advised that the substance of the comments and the identity of the individuals or entities submitting the comments will be subject to public disclosure. FNS will make the written comments publicly available on the internet via http://www.regulations.gov.