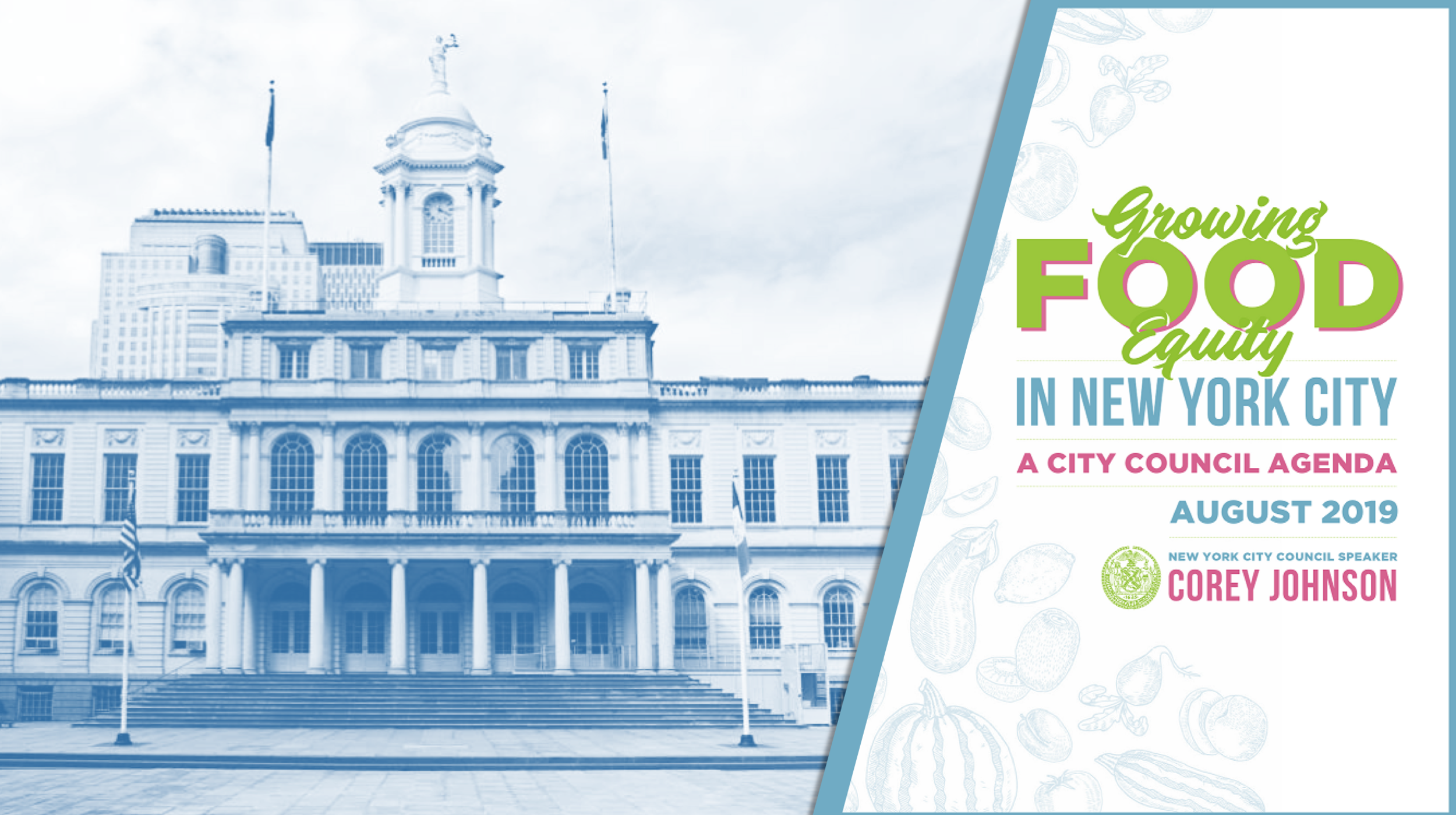 On August 14 the New York City Council introduced more than a dozen legislative measures connected to many of the food system goals outlined in the Growing Food Equity in New York City Agenda announced by City Council Speaker Corey Johnson this summer. On September 18, 2019 City Council held a joint public hearing of the Committee of Economic Development, the Committee of Education, and the Committee of General Welfare inviting public input on this comprehensive food policy package comprised of 14 bills and 2 resolutions. CUNY Urban Food Policy Institute staff testified in support of the measures and recommended that the City take into consideration several key factors to ensure their effective implementation in the coming months and years.

The Speaker’s recent report on Growing Food Equity in New York City describes and offers concrete responses to serious food related problems that affect New York City including high levels of food insecurity and diet-related diseases, lack of access to healthy and affordable food for many New Yorkers, negative climate impacts from our food system, food waste, low wages and limited benefits for the city’s food workforce, and persistent racial/ethnic gaps in all food outcomes. Once again, the City Council has played a key role in advancing food planning and policy.

Today’s hearing considers 14 proposed new local laws and two proposed resolutions that together have the potential to enable New York City to make significant progress in reducing these problems. As one of the signatories of the international Milan Urban Food Policy Pact, New York City has a unique opportunity to lead by example in growing urban food equity. We support the legislation being considered today, but rather than commenting on each specific proposed law or resolution, our testimony highlights key factors that we believe the City Council should consider as it seeks to spark a new round of public policy initiatives to improve New York City’s food environments.

Our suggestions are based on our 2018 report analyzing 10 years of food policy changes in New York City. Many of the recommendations from the Growing Food Equity report and embodied in the legislation under consideration today embrace those in that report, to our knowledge, the most comprehensive assessment of the synergistic and cumulative impact of the food policies of the City Council and Mayors Michael Bloomberg and Bill DeBlasio. Our report concluded that, on the one hand, over the last decade, New York City has implemented dozens of new food policy initiatives, many constituencies have claimed a voice in shaping food policy, and food policy has become a higher priority for the Mayor, City Council, and other city officials. These accomplishments provide a strong foundation for the future progress that the policies under consideration today can bring.

On the other hand, our report found that, despite a decade of food policy initiatives, key indicators of nutritional well-being and food equity have barely budged and wide socioeconomic and racial/ethnic gaps in health and food access persist. This is in part due to current governance structures which seem inadequate to create effective responses to some of the most serious threats to a healthy food system for New York City, including continuing gentrification, Republican federal initiatives to roll back the advances in food policy of the last decade, growing income inequality, and the disruption of food retail in New York and the nation. Setting clear objectives for food policy in New York City and ensuring that residents have significant power to shape their local food environments are prerequisites for making substantive improvements in the next decade of urban food policy.

As the City Council begins to address these problems, we urge you to ask that most basic question: “What can we do this year and in the future to ensure that ten years from now, we are not again wondering why there hasn’t been more progress in achieving healthier, more equitable and sustainable food environments?”

To achieve the goals articulated in the Speaker’s report, we suggest that the City Council consider these key factors:

1. Coordinated Implementation. Ensure that the goals and strategies embodied in these 16 measures reinforce each other and do not conflict or compete for resources. In our view, the first wave of food activism in New York City proposed too many competing goals and plans and failed to allocate enough new resources, thus limiting the impact of the laudable new attention to food policy. Perhaps the re-authorized Office of Food Policy (Intro 1666) and a new City Council committee or sub-committee could play these coordinating roles.

2. Deep Food Democracy. The Speaker’s agenda calls attention to the key role of food governance. Finding new ways to give more New Yorkers a voice in shaping their food choices and food environments can make food democracy a reality. Expanding food democracy, in our view, will require more focused attention to the power of the global food industry and its role in diet-related disease and food insecurity. Intro 1660, the proposal to create a good food purchasing program could be an important step in that direction, changing the practices of the food corporations that sell to the city. Giving communities more authority to regulate predatory marketing of unhealthy food might be another. Among the existing mechanisms that could be used to expand food democracy at the municipal level is the City Charter’s 197-a planning process, expanding the role of Community Boards in food planning, and allocating more resources to participatory budgeting. The urban agriculture plan (Intro 1663) could also expand the power of communities to protect urban gardens and farms from development. By using its authority over land use, providing oversight of city agencies, and approving municipal budgets, the City Council can find additional ways to grow both democracy and equity. Giving those most adversely affected by our current food system a clear voice in shaping local and municipal food policies and systems will help to ensure that those who will gain the most from transformation will have a loud and equitable voice in policy making.

3. Mobilizing Broad and Diverse Coalitions. Making meaningful changes in food policy will require supporting and mobilizing the diverse constituencies that will benefit from a healthier and more equitable food system: children, seniors, Blacks and Latinos, recent immigrants, people with diabetes, low wage food workers, health care workers, upstate farmers, among many others. In City Limits, we recently made the case for adding food to the Green New Deal menu, an example of building new broad and diverse coalitions to advance food policy. Food procurement policies, urban agriculture, and good food jobs strategies are other examples of issues that can build broader, deeper and more powerful coalitions for reform. Substantive changes in food environments will require powerful constituencies that can stand up to special interests. By fostering such mobilization, the City Council can contribute to successful and sustainable implementation of new policies.

4. Multi-level Food Policy and Planning. New York City’s food system stretches across the city, the adjacent farming areas in the Hudson Valley and Eastern Long Island and throughout the tristate area. To achieve the goal of food planning that is spelled out in Intros 1654, 1660, and 1664, the city will need to find ways to coordinate and integrate food planning at the municipal level with planning at the regional and tristate levels. Successful efforts to protect the city’s watershed provide a model. The health, economic, and environmental benefits of food planning will be increased by such an approach. We encourage the City Council to consider such multi- level processes that extend beyond changes to the Administrative Code.

5. Interlinked Legislative and Budget Priorities. Finally, achieving food equity in New York City will require reallocating the public and private resources that now maintain our inequitable food system. The Growing Food Equity in New York City report recognizes some of the first steps in budgetary changes in Fiscal Year 2020 that lead to a fairer food system. For Fiscal Year 2021, the City Council Members who sponsor the proposed food equity laws and resolutions and all those who favor a more equitable food system in New York City should begin now to identify the city and state budgetary changes that will be needed to make meaningful progress towards that goal.

In the coming weeks and months, the Speaker, the City Council and the Mayor will begin to flesh out a timeline for taking action to grow food equity in New York City. The CUNY Urban Food Policy Institute, in partnership with many other food civil society organizations, offers its academic expertise and research capacities, and the passion and power of CUNY students and faculty, to assist the City Council and the NYC Mayor’s Office of Food Policy and the new Office of Urban Agriculture to ensure that 10 years from now, food equity has in fact taken root and grown in New York City and we can celebrate our accomplishments and set new, even more ambitious goals for the coming years.

Freudenberg, N., Willingham, C., & Cohen, N. (2018). The Role of Metrics in Food Policy: Lessons from a Decade of Experience in New York City. Journal of Agriculture, Food Systems, and Community Development, 8(B),191-209.