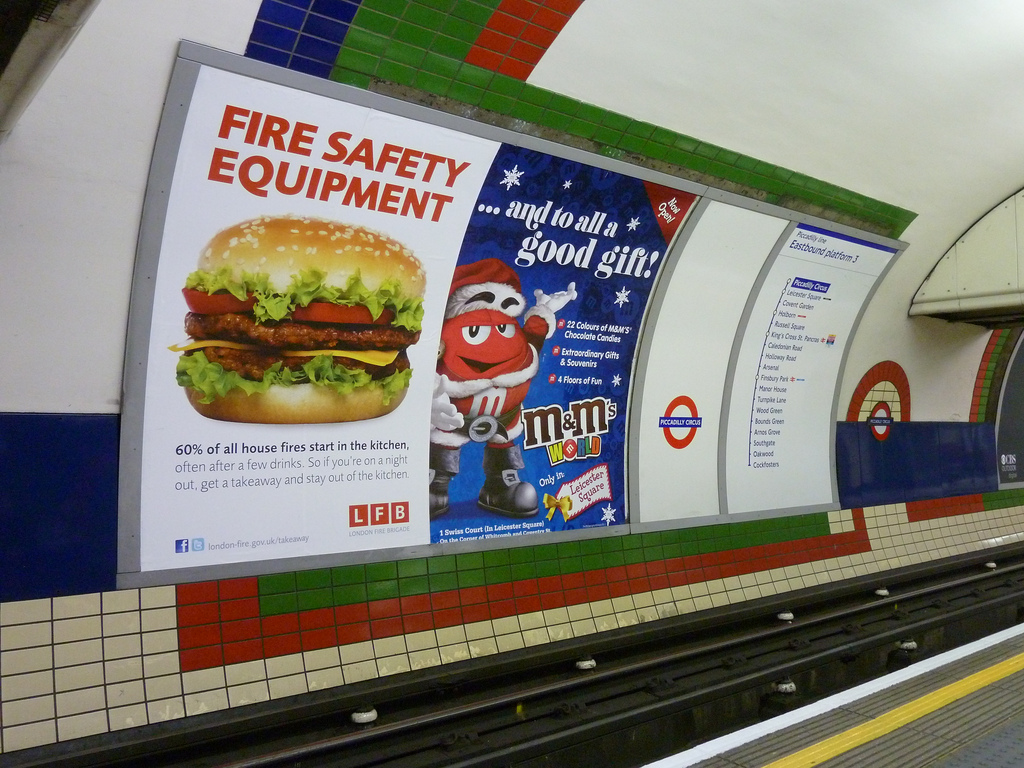 This column introduces a new Food Policy Monitor feature Food Policy from Elsewhere. It will explore food policy innovations in other cities and nations for their relevance to New York City.

In November, London Mayor Sadiq Khan announced the London transport network will ban junk food advertising on all modes of transport operated by Transport for London, that city’s equivalent of New York’s Metropolitan Transportation Authority (MTA). The ban, to go in effect at the end of February 2019, will cover ads for foods high in sugar, salt and/or sugar and considered “less healthy” under Public Health England guidelines. Food companies and fast food chains will only be able to promote healthier options, rather than publicizing brands.

“Child obesity is putting the lives of young Londoners at risk,” said Mayor Khan, “and placing huge pressures on our already strained health service. It is absolutely imperative that we take tough action against this ticking time bomb now, and reducing exposure to junk food advertising has a role to play in this—not just for children, but parents, families and carers who buy food and prepare meals.” In a public consultation process before the ban was announced, 82% of the 1500 Londoners who participated supported the ban.

In 2017, Amsterdam also banned all ads about unhealthy food aimed at children in the city’s subway system, part of a larger initiative to reduce child obesity. “Children have the right to grow up in a healthy environment. We as a municipality want to contribute to that in all possible ways,” explained Eric van der Burg, the Amsterdam alderman for Health and Sports. “In the past we used to see advertisements for cigarettes everywhere. Now we find it normal that we no longer expose children to it. Unhealthy food has to go the same way.”

If children in London and Amsterdam deserve protection against marketing of products associated with preventable illnesses and premature death, don’t New York City children deserve the same? City residents ride the subway a billion times a year, reports the MTA, and millions of New York City children are exposed to ads in busses, subways and at stations for hours every week. Nearly half of the city’s children are overweight or obese and the diet-related diseases exacerbated by overweight are a leading cause of economic and racial/ethnic inequalities in health in New York City.

In New York City, it is the board of the MTA that sets advertising policy for the system. In October 2017, the MTA decided to end alcohol ads on the subways, a response to a decade long public heath campaign to protect NYC children from exposure to ads and research evidence that exposure to ads led to higher drinking rates. Over strong objections from the alcohol industry, the MTA decided that added health protection for children and youth was worth the modest decline in advertising revenues.

Food industry and other opponents of such bans cite expanded court protection of commercial speech and the MTA does worry about ad revenues. Other critics point out that by themselves, ad bans will not solve the city’s obesity problem, true but an example of the corporate tactic of making the perfect the enemy of the good to defend their profits. Ultimately, the question comes down to whether the right of food companies to advertise unhealthy products supersedes the right of the city’s children to healthy public environments.

By exploring how New York City can follow the lead of London and Amsterdam, city policy makers, public health professionals and advocates can help to improve the health of our city’s children.