Q and A on Food, Trade and Health

Q and A on Food, Trade and Health 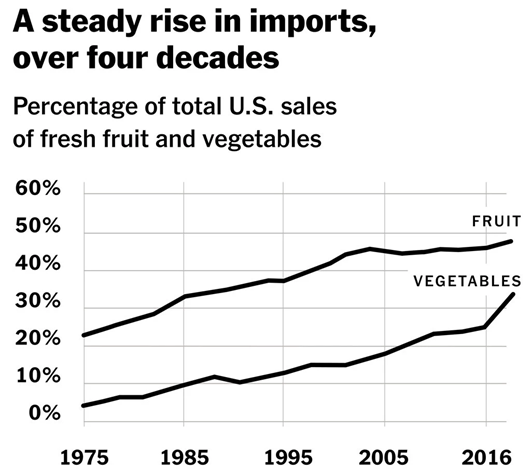 According to the United States Department of Agriculture’s Economic Research Service, the proportion of fresh fruit eaten in the United States that was imported rose to 53.1 percent in 2016, up from 23 percent in 1975. In this same period, the proportion of fresh vegetables that was imported rose to 31.1 percent, up from 5.8 percent. Increasingly, our healthiest food comes from other countries. For example, since the NAFTA Trade Agreement in 1994, U.S. consumption of tomatoes, peppers, cucumbers, limes, berries, avocados and mangos imported from Mexico is way up and still rising.

What does the United States send to Mexico in return? Since 2000, U.S. agricultural exports to Mexico increased almost threefold, from $6.4 billion to $17.8 billion in 2016. The main product was corn, followed by soybeans and pork. The first two are the foundation for the ultra-processed products high in fat, sugar and salt and associated with the rise in diet-related disease in Mexico and around the world.

In the last few weeks U.S. trade policy has made headlines. Since taking office in 2017, President Trump has withdrawn the United States from the Trans Pacific Partnership Agreement (TPP), a global trade pact signed in 2016 by the United States and 11 other Pacific Rim nations and instituted re-negotiation of the North American Free Trade Agreement (NAFTA), the 1994 agreement between Untied States, Canada and Mexico. He has imposed new tariffs on steel and aluminum and threatened additional trade sanctions against some of the closest allies of the United States. Some of these proposals affect food trade. For example, Canada recently threatened to retaliate to the new tariffs on aluminum and steel by imposing its own tariff on imports from the United States of such products as yoghurt, maple syrup, whiskey, chocolate and strawberry jam. Mexico’s retaliatory tariffs, reports Reuters, target pork legs, apples, grapes and cheeses as well as steel, each products from U.S. heartland states that supported Trump in the 2016 election. A return to the trade wars of earlier eras threatens disruption of global food markets and agriculture.

But what has been missing from the political debates on trade has been a deeper analysis of the impact of the changes Trump has announced and proposed on global food policy. How might they influence global patterns of food insecurity and diet-related diseases? To assist Food Policy Monitor readers to answer these and other questions, we present this Q and A on food and trade.

Q. How does food trade influence diets and health?

A. Nations have exported and imported food for centuries, but the pace of food trade has increased dramatically. Over the last 40 years, the worldwide share of food calories crossing international borders rose from about 12 percent to more than 19 percent. As more nations increase their share of food imports and exports, food trade plays a growing role in national and global patterns of food insecurity and diet related disease.

According to the UN Food and Agriculture Organization’s The State of Food Security and Nutrition 2017, after a long period of decline, world hunger is on the rise: the estimated number of undernourished people increased from 777 million in 2015 to 815 million in 2016. About two billion people worldwide—30% of the world’s population—are overweight or obese, putting them at elevated risk of diet-related diseases.

A recent report in Nature Sustainability found that the current global food supply is “sufficient to meet average nutrient demands for the aggregate global population, if equitably distributed.” As food trade increases, its potential to solve – or exacerbate – the problems of hunger and diet-related disease also grows. Trade is a major influence on how food is distributed within and between countries.

While food trade has contributed to improvements in nutritional health in some places, the experiences of two nations, Haiti and Mexico, illustrate the potential for harm. For nearly two centuries after independence in 1804, Haiti grew enough rice to feed its people.

In the 1970s, Haiti began to import rice. In the 1980s, the United States pushed for trade liberalization, calling on Haiti to reduce tariffs and allow the U.S. to import more rice. The International Monetary Fund opposed Haiti’s efforts to save its rice production. By 2010, Haiti was importing 80% of its rice and the total proportion of imported foods rose from 19% in the 1970s to 51%. Today, about half of Haiti’s population is undernourished. In 2010, former President Bill Clinton publicly apologized for forcing Haiti to drop tariffs on imported subsidized U.S. rice during his time in office. It wiped out rice farming, seriously damaging Haiti’s ability to be self-sufficient. “It may have been good for some of my farmers in Arkansas, but it has not worked. It was a mistake,” Clinton said in 2010.

In the early 1990s, as Alyshia Galvez and Nicholas Freudenberg wrote in the Dallas News earlier this year, Mexico chose to hitch its wagon to the U.S. and Canadian economies by joining NAFTA. Mexico agreed to eradicate its import substitution, tariff and price support systems as well as subsidies of corn. As the dominant partner in the deal, the U.S. won the right to export and invest more in Mexico without having to reduce its domestic corn subsidies.

In the decade and a half after NAFTA was signed, the Mexican agricultural economy, which had provided access to affordable food to most Mexicans, collapsed. This drove half a million people to migrate each year and millions more were internally displaced. Small farmers who had grown their own food moved to cities where dense populations, aggressive marketing and ubiquitous availability of American processed food changed the diet of most Mexicans. Between 1994 and 1998, U.S. direct investment in Mexican food and beverage companies quadrupled. In eight years, the number of Walmart stores in Mexico grew from 114 to 561.

These changes in food availability led to changes in diet. Between 1992 and 2000, calories from sugary sodas among Mexicans increased by almost 40%; for children they doubled. In that same period, the cost in pesos per calorie of food tripled, making the low cost, unhealthy food imported by U.S. food multinationals more attractive, especially to poor people. Between 1988 and 1999, the prevalence of overweight and obesity in Mexico almost doubled, from 33% to 59%. The prevalence of diabetes increased by 30%. By 2004, diet-related chronic diseases caused 75% of all deaths. These direct and indirect costs of Mexico’s NAFTA-imposed health burden constitute an ongoing obstacle to economic development, a far larger cost than the more widely recognized war on drugs.

Q. What are the benefits and costs of global food trade?

A. Proponents of increased global food trade make the case that it can increase availability of food, make seasonal produce more available all year around the world, provide income to low-income nations and farmers, and contribute to economic growth, thereby lifting all boats. Proponents also cite evidence associating increased trade with increases in longevity and reduction in disease.

Critics argue that food trade favors consolidation of transnational food companies, those best equipped to operate on the global scale. It favors value-added products (e.g., chocolate rather than cocoa beans), whose benefits accrue to companies in high income nations, rather than small farmers. It reduces food self-sufficiency (as shown in Haiti) and can put the products that farmers in low income countries grow out of their reach. For example, farmers in Mexico grow flowers for export to the United States, rather than food to feed their families and farmers in Bolivia can no longer afford the quinoa they grow, having to rely instead on cheap processed food with fewer nutrients.

In any specific country, the overall impact of food trade is a complex mix of benefits and costs.

A. President Trump has charged that NAFTA has hurt the U.S. economy and that TPP would have had he signed it. During the 2016 campaign, he called NAFTA “the worst trade deal in history.” The US continues to negotiate with Mexico and Canada with the hope of reaching a deal ahead of Mexico’s presidential election on July 1 and before the 2018 U.S. midterm elections. Recently, President Trump has called for NAFTA to include increased border policing of immigration, a demand Mexico is unlikely to support. Trump’s goals are to reduce the trade imbalance with Mexico, increase manufacturing jobs in the U.S., and end a trade dispute resolution mechanism that bypasses American courts. Farm groups and agricultural producers are lobbying hard to maintain parts of NAFTA that favor their interests.

Several changes in NAFTA could reduce the health burden that it has imposed on Mexico. First, the agreement could favor small scale farmers, a benefit for the health, environment and economy of Mexicans. Second, a new agreement could ensure wage and health protections to workers- in all three NAFTA nations, benefiting the food supply and food workers in each nation. Finally, a new agreement could drop the secret courts NAFTA establishes to settle disputes between corporations and states. It seems unlikely that the changes in NAFTA proposed by President Trump will achieve these goals. 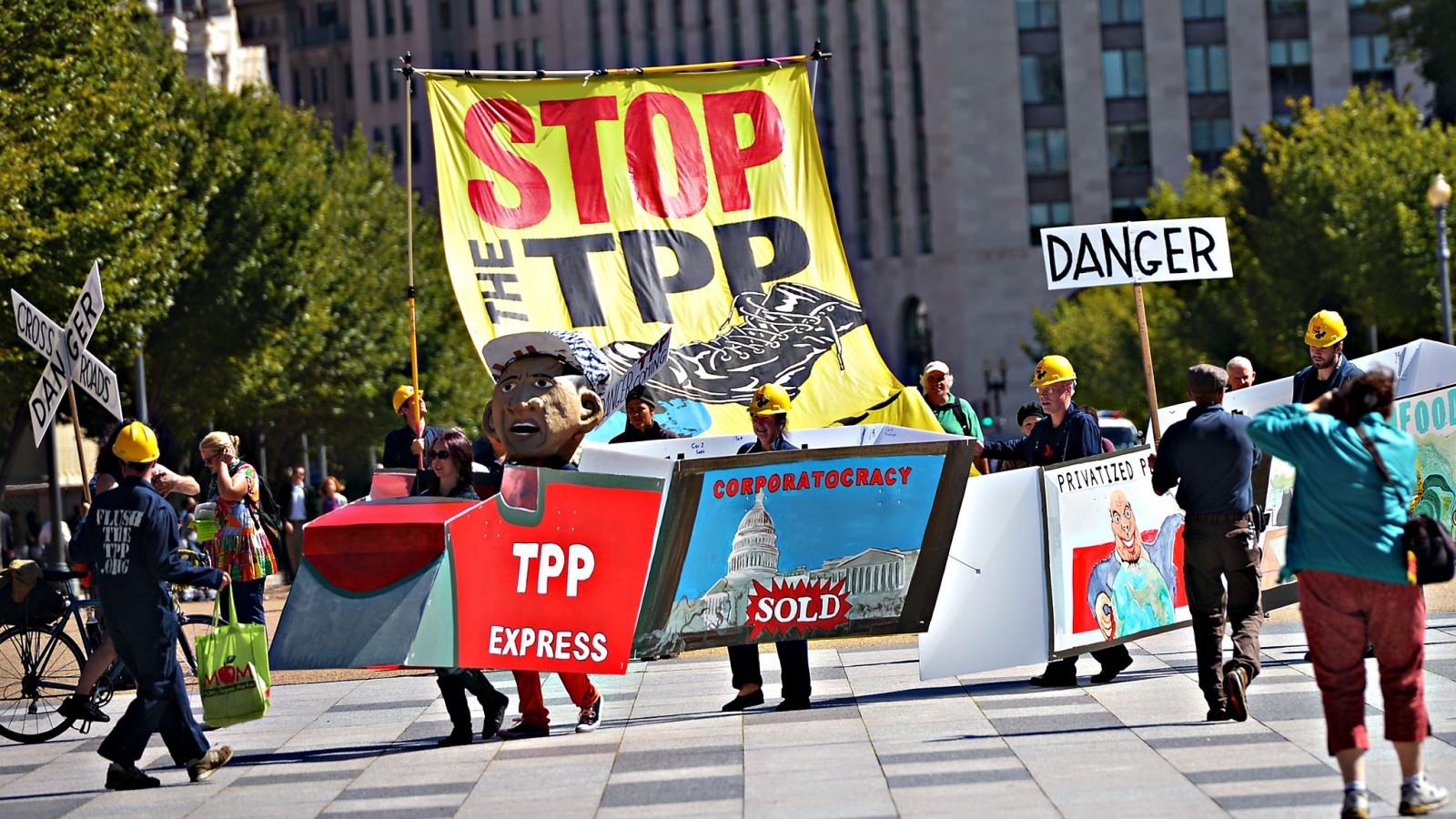 A March against the Tran Pacific Partnership in 2014. Source

Q. Why should people in New York City and the United States care about trade agreements related to food?

A. We live in a city and nation that is embedded in a global food system. Public policies that shape the foods that the United States imports from other countries and what food products we send overseas reflect our values as a nation. As health professionals, nutritionists, or food justice advocates, we have the opportunity to educate the American people about the consequences of the trade choices our nation makes. Food trade is a health, political and moral issue. The decisions the United States makes on food trade now will affect food prices, food security and diet-related diseases in New York City and around the world for decades to come.

Q. Where can readers learn more about the organizations that are seeking more equitable trade pacts that make food and health a priority?

Food First is a “people’s think tank” dedicated to ending the injustices that cause hunger and helping communities to take back control of their food systems. Read: The TPP is Dead: Time to Transform the Food System.

Global Trade Watch seeks to ensure that in this era of globalization, a majority have the opportunity to enjoy America’s promises: economic security, a clean environment, safe food, medicines and products, access to quality affordable services such as health care and the exercise of democratic decision-making about the matters that affect their lives. Read: NAFTA Talks Should Continue Until a Good Deal Is Achieved

The Institute for Agriculture and Trade Policy has often pursued solutions that benefit family farmers, rural communities and the planet. It has also advocated for more democratic and economically just trade agreements. Read: How NAFTA is Making Our Food and Water Much Less Healthy and Principles of a new U.S. trade policy for North American agriculture

View the Livestream of the June 6 CUNY Urban Food Policy Forum on Food Trade and Health on the CUNY SPH Facebook page.