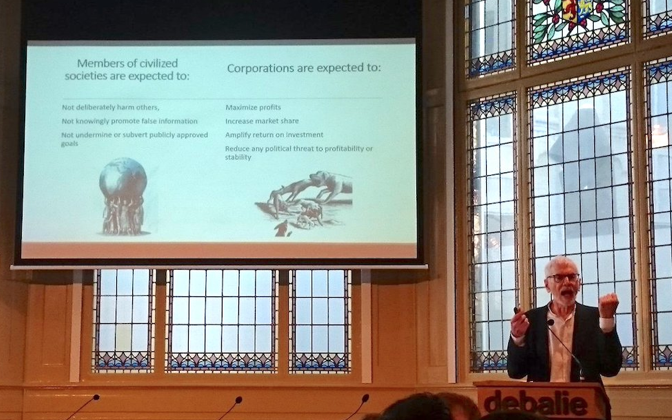 Above, Nicholas Freudenberg speaks on corporations and health at DeBalie, a public lecture hall in Amsterdam.

In both Europe and the United States, public health regulation of the food industry is under attack. In both these major world markets, the global food industry is using its power and influence to oppose taxes on sugary beverages, resist mandates for stronger regulation of food labeling, and defend continued presence of pesticides and herbicides in many foods. But the growing health and economic burden of diet-related chronic diseases—also called non-communicable diseases—is creating new opportunities for support for stronger public health protection.

How can public health advocates advance policies that make our food safer and healthier? This week, the World Health Organization (WHO) approved a resolution urging all countries to get rid of trans fats in their food supply by 2023, with laws banning them if necessary. Artery-clogging trans fats kill half a million people a year around the world and they’re completely unnecessary, added only to extend shelf-life and modify texture. Denmark banned trans fats in 2003 and New York City in 2006, showing how pioneering policies can start in one place, then spread globally.

At a recent series of lectures in Brussels, Amsterdam and The Hague, Nicholas Freudenberg, Distinguished Professor of Public Health at the City University of New York School of Public Health, Director of the CUNY Urban Food Policy Institute and author of Lethal but Legal: Corporations, Consumption and Public Health, examined some of the issues confronting those seeking to reduce corporate practices that harm health. In his lectures, he suggested five broad goals for a transatlantic agenda to protect public health against corporate efforts to roll back regulations. These included:

The lecture and trip was sponsored by Wemos Foundation, a Dutch global health foundation, the European Public Health Alliance and Corporate Europe Observatory, timed to coincide with the translation of Freudenberg’s book into Dutch, Legaal Maar Fataal. Each of these organizations provides useful resources for North American public health professionals who want to explore what the United States and the European Union can learn from each about about public health regulation. The European Public Health Alliance (EPHA), an organization of public health nongovernmental organizations, patient groups, health professionals and disease groups, works to improve health and strengthen the voice of public health in Europe. Its report Deceptive innovation: food marketing in scientific disguise examines the role that infant formula manufacturers have played in promoting new products for infant feeding.

The Corporate Europe Observatory is a research and campaign group working to expose and challenge the privileged access and influence enjoyed by corporations and their lobby groups in EU policy making. A recent blog post What the Monsanto Papers tell us about corporate science describes how the Monsanto Company actively subverts science, both in the company’s practices and the way it abuses science’s moral authority to push for its interests. Monsanto produces Roundup, an herbicide that has been shown to contaminate food supplies around the world. Scientists are debating the evidence on whether Roundup is carcinogenic.

For public health advocates in the United States, these organizations and their reports can be useful resources for developing strategies to resist deregulation and reduced enforcement of public health laws. “As the U.S. government dismantles the public health regulatory agencies developed over the last 50 years,” said Freudenberg, “researchers need to document the impact of these changes and develop new strategies to protect public health. By partnering with European scientists and advocates, we can accelerate this process.”