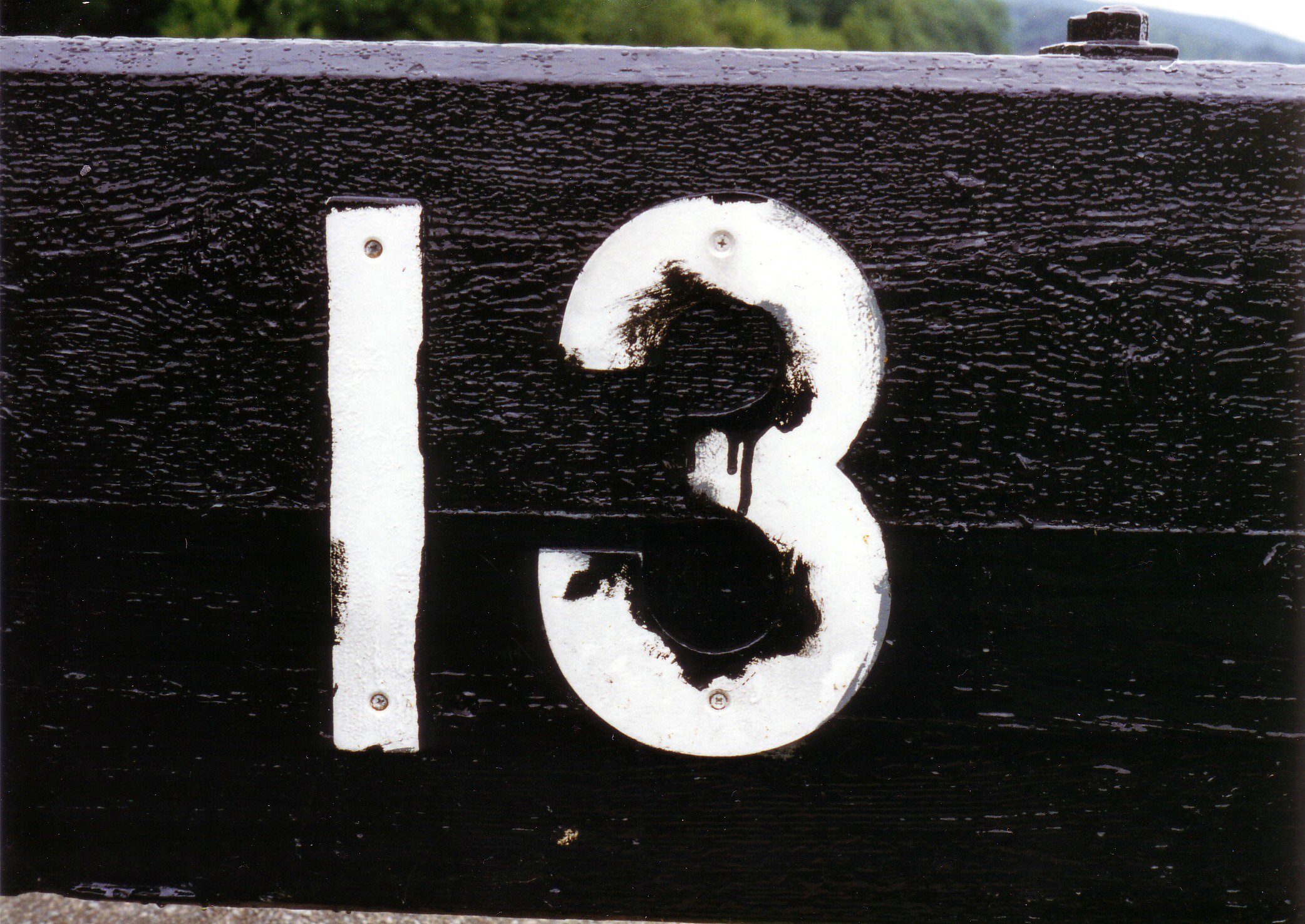 The past year reminds us how quickly what we take for granted can change—and how what seemed unachievable for so long can suddenly be won. To help Food Policy Monitor readers take stock of the year, we identify our choices for a Baker’s Dozen of noteworthy food events in 2017, defined as events that had an important impact on urban food environments in New York City or elsewhere. 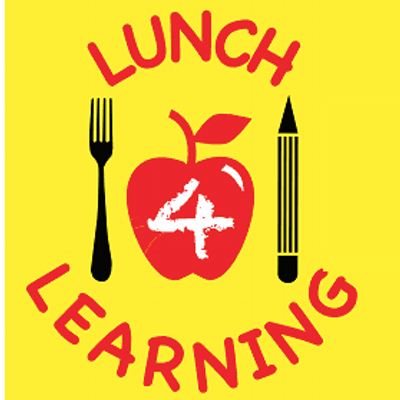 At the start of school in September, New York City began serving all school meals free of charge, achieving the primary goal of the Lunch4Learning campaign. Changes in the New York State formula for calculating the number of students direct-certified for free meals gave the city an incentive to implement the federal Community Eligibility Option on a citywide basis. The change will reduce the paperwork and record keeping burden, make the meals truly available to students whose family incomes had made them ineligible for free meals regardless of their actual need, and reduce and eventually eliminate the stigma that has long deterred some eligible students from participating. The success of this campaign demonstrates the power of persistent grassroots organizing to change food policy. 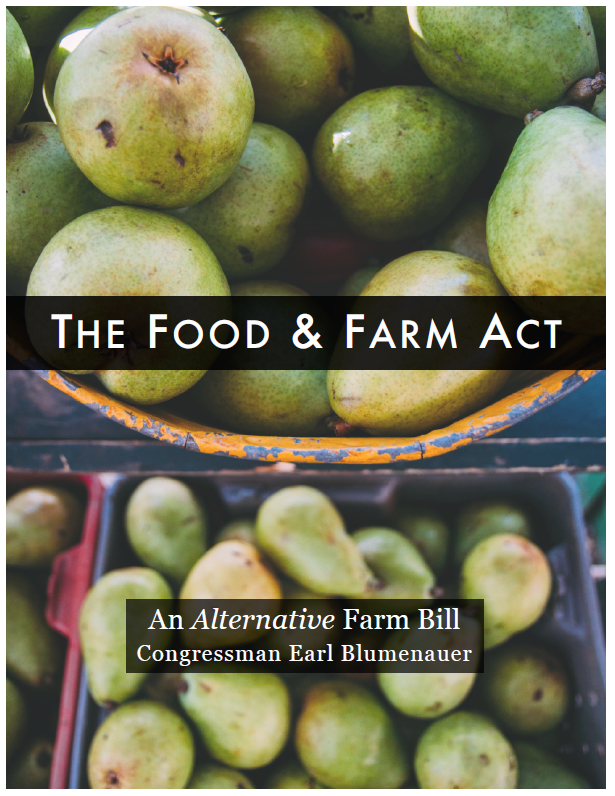 Congressman Earl Blumenauer of Oregon introduced “The Food and Farm Act, An Alternative Farm Bill.” It is described in the legislative preamble as “A Bill To reform the safety net for farmers and ranchers, enhance soil, water, and habitat conservation, encourage beginning farmers and ranchers, strengthen nutrition for Americans, support agriculture research and innovation, reduce food waste, improve animal welfare, and invest in regional food systems, and for other purposes.” It would eliminate the current major crop subsidy programs and shift spending to organic and local production and research to aid small farms. Blumenauer argues that the time has come for a comprehensive overhaul of American food and farm policy. While this bill is unlikely to pass anytime soon, it is an important effort to define an alternative vision for farm and food policy, one that can bring together the diverse constituencies who would benefit from a farm bill that put people rather than Big Food profits first.

Continued decline in sales of fast food and soda 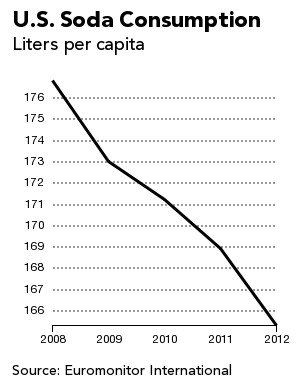 By mid-2017, sales in U.S. chain-restaurants had declined for 15 months, the longest downturn since the 2008 Financial Crisis. Sales have declined at McDonalds and other chains for two reasons: an economy where many potential customers don’t earn enough to keep spending at the Golden Arches and the continued lack of enthusiasm for fast food among Millennials. Similarly, U.S. sales of soda drinks fell for the 12th year in a row, as consumers chose healthier options and more cities and states approved sugar taxes aimed at reducing obesity and diabetes. The challenge for food activists: preventing soda and fast food multinationals from recouping falling profits in low and middle-income countries.

The Federal Trade Commission approved Amazon’s $13.7 billion purchase of Whole Foods, upending the $800 billion food retail sector by giving the online shopping giant a physical presence in cities and suburbs across the US. The Amazon-Whole Foods merger will increase pressure on conventional supermarkets to expand their online offerings, and will enable Amazon to compete head to head with Walmart, the nation’s largest grocer with 14.5% of the US market. What this means for urban consumers is uncertain. In the short run, Amazon has lowered prices at Whole Foods to attract new customers, but in the long run, independent grocers may meet the same fate as independent bookstores in a food retail marketplace dominated by Amazon. 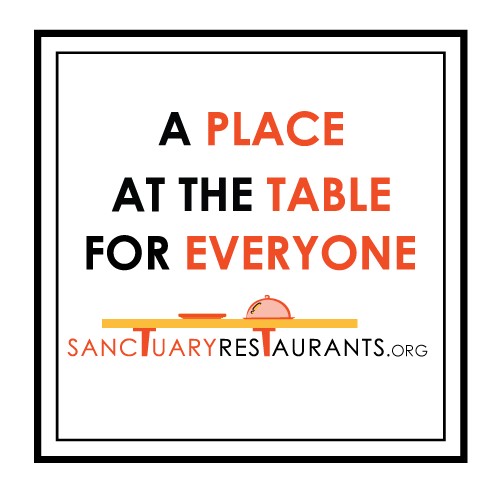 In response to President Trump’s anti-immigrant initiatives and his administration’s effort to punish sanctuary cities, a new phenomenon, sanctuary restaurants emerged. Based on the reality that many immigrants work in the food sector, the concept is a joint project of the Restaurant Opportunities Centers (ROC) United and Presente with the participation of thousands of workers, diners, and allies nationwide. Sanctuary Restaurants is not a legal designation. Sanctuary Restaurants offers support and resources to workers, restaurants, and consumers to help create the inclusive and equitable world we want to see.

Scientists at the University of California, San Francisco reported the discovery of documents showing that sugar industry officials canceled a study, named Project 259, in the1960s because it suggested that sucrose, a common sugar, contributed to heart disease and bladder cancer. Last year, these researchers discovered other documents showing the sugar industry funded a report that minimized links between sugar and coronary heart disease. This November, the tobacco industry was forced by a federal court order to publish and broadcast messages correcting the lies it had told about the harmful health consequences of tobacco. Are similar messages from the sugar industry in our future? 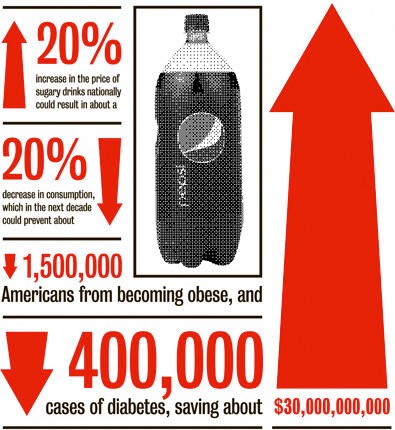 In October, lawmakers of Cook County, which includes Chicago, voted overwhelmingly to repeal the county’s soda tax. The decision was a major victory for Big Soda and a setback for public health advocates, who argue that sugary beverage taxes can play an important role in reducing obesity and diabetes, major contributors to premature death, preventable illness and health inequities. William Dermody of the American Beverage Association, a lobby group, was thrilled, claiming the repeal of the tax showed that “beverage taxes are really a money grab that has nothing to do with public health”. Whether the Cook County repeal or the successes of soda taxes in Philadelphia, Berkeley, San Francisco, Oakland, Albany (Ca), and Seattle predict the future of this public health measure is a key food policy question for 2018. 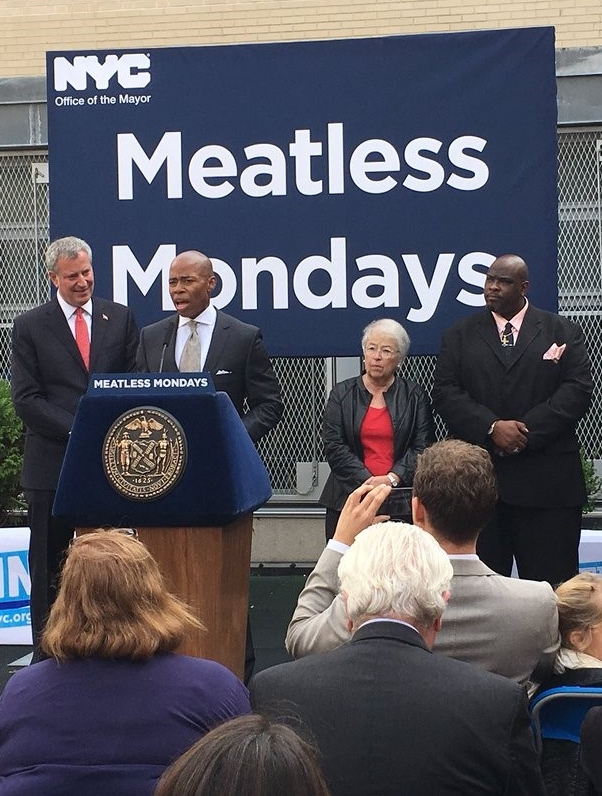 In October, Mayor De Blasio, Schools Chancellor Farina and Brooklyn Borough President Eric Adams announced that fifteen Brooklyn public schools will participate in a Meatless Monday pilot program. The selected schools will be provided with all plant-based menus for both breakfast and lunch every Monday, and the Mayor, First Lady and Gracie Mansion will join in by observing meatless Mondays as well. Plant based meals will not only contribute to children’s health—less than 20 % of NYC children ages 6-12 eat the recommended five portions of fruits and vegetables a day—but also help to preserve the environment, as fruit and vegetable production uses far less water and releases far less carbon than the production of meat. The fifteen pilot schools will join five that are exclusively vegetarian. Up next for advocacy: ensuring that vegetarian, kosher and halal food is available in all city schools where children request it, making New York City a showcase for healthy school food for all cultures. 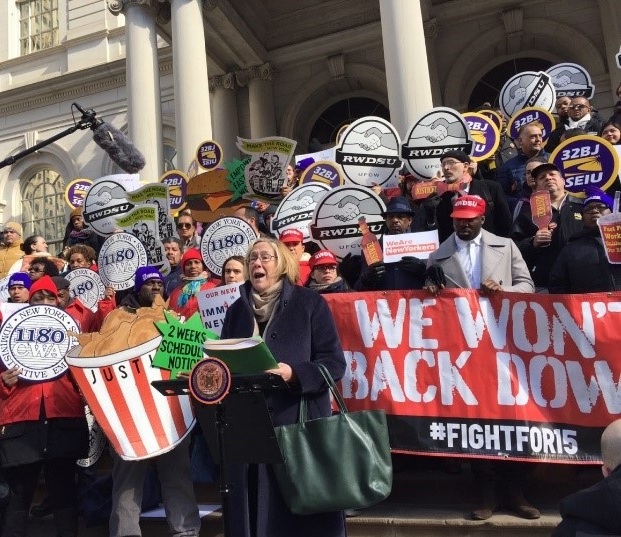 In May 2017, Mayor de Blasio signed several laws to regulate scheduling for fast food and retail workers in New York City. Collectively, these local laws are known as the “Fair Workweek Law.” Specifically, the Fair Workweek Law requires that fast food employers provide employees with two weeks of notice of schedule and pay premiums to employees for changes made to their schedules, offer open shifts to existing fast food employees, ban on-call scheduling for retail employees, require that retail employees receive 72 hours advance notice of schedules, and ban “clopenings”, the practice of having the same worker close the store after one shift and open it a few hours later for the next shift. The new law is an important first step in ending abusive scheduling practices in the fast food and retail industries and a model for other jurisdictions seeking to improve the working conditions of fast food and other workers. 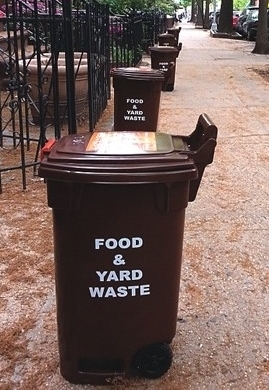 In June, New York City’s organics collection program became the largest in the United States, with 1.6 million residents enrolled, up from 717,000 at the end of the 2016 fiscal year. In addition to expanding curbside collection in low density neighborhoods, the Department has nearly doubled enrollment of high rise buildings in high density areas. In addition, the Department of Sanitation has begun enforcement of the commercial organics mandate for the first cohort of commercial establishments, has initiated a Zero Waste Schools program in 126 public schools, and has completed phase one of the rollout of recycling in New York City Housing Authority buildings. 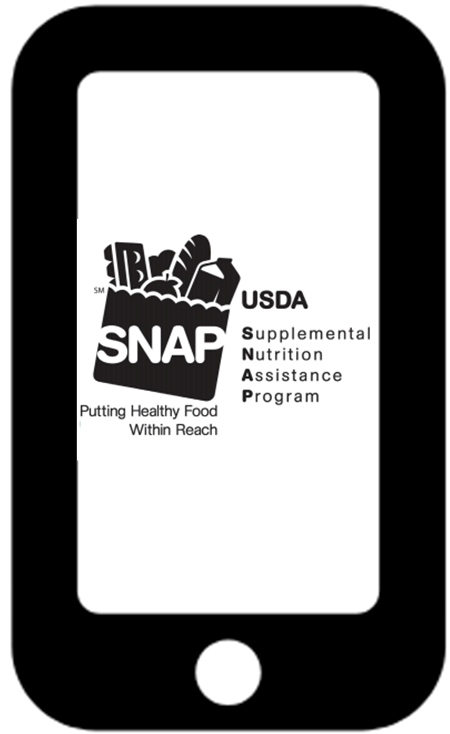 USDA selected seven retailers for a national pilot that for the first time will enable SNAP participants to use their benefits at online grocers. USDA hopes that online access will improve food availability and that home delivery will help those with mobility limitations, and online retailers hope to capture a share of the $66 billion in SNAP dollars spent nationwide in 2016. The pilot’s success depends on whether online shopping is more affordable and convenient than local brick and mortar grocers. Key public health questions are whether online access leads to more or less healthy purchases and the effect of online access on policies, like the Healthy Food Financing Initiative, that encourage physical grocers to locate in low income communities. 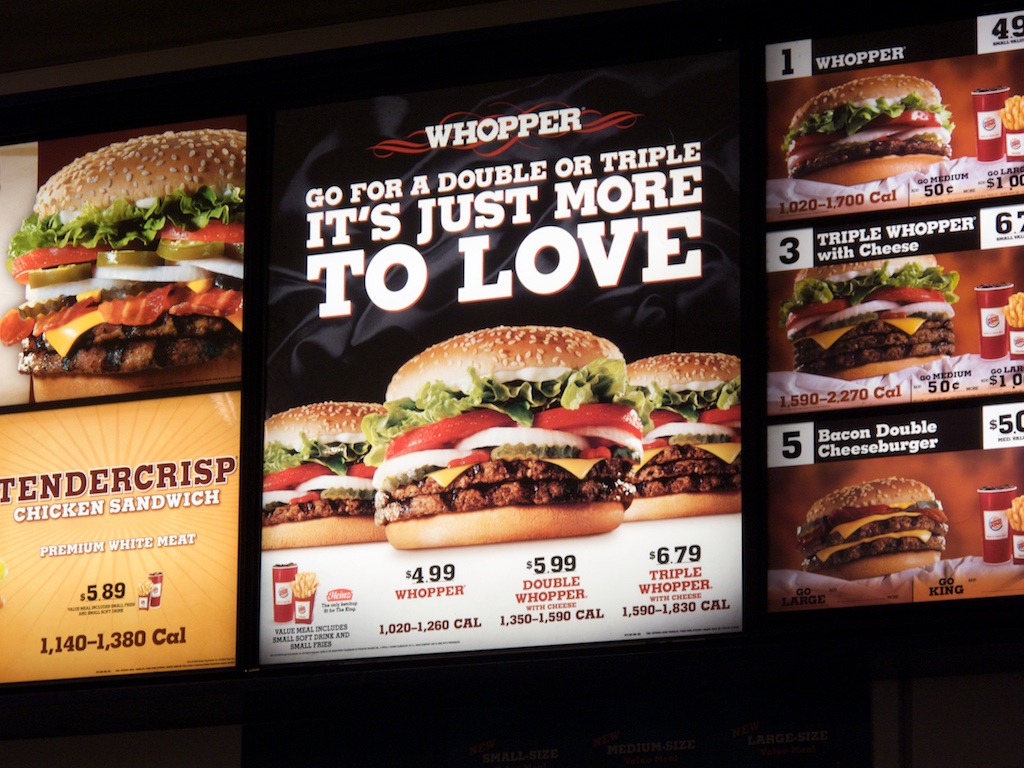 “Menu Labeling” by King Huang is licensed under CC BY 2.0

A lawsuit by the Center for Science in the Public Interest, National Consumers League, and Earthjustice foiled an attempt by the US Food and Drug Administration to delay requiring food retailers to post calorie information. Menu labeling, first mandated by New York City in 2008 to enable customers at to gauge and moderate their food purchases, was included in the 2010 Affordable Care Act. In 2014, FDA issued a rule requiring menu labeling by May 2017, but the Trump Administration proposed delaying compliance until 2018. In response to the lawsuit, FDA Commissioner Gottlieb agreed to no further delay or changes to the menu labeling requirements. In 2018, health lawyers will find other opportunities to use the law to defend food policies that protect public health.

In 2014, Chileans had the highest per capita daily calories from sugary beverages in the world. In June 2016, Chile began implementation of a first-of-its-kind policy that combined warning labels on unhealthy foods with restrictions on unhealthy food marketing. The government mandated that any foods or beverages exceeding a certain level of sugar, sodium, saturated fat, or calories must carry a warning label identifying the excess. A 2017 study from the University of North Carolina found that adding taxes on sugar-sweetened beverages and ultra-processed foods would promote a healthier diet in Chile. Can the U.S. learn from these experiences?