NYC Council Holds Hearing on Getting to Zero Waste by 2030 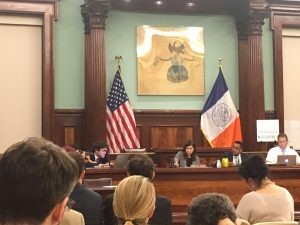 NYC Council Holds Hearing on Getting to Zero Waste by 2030

Getting to Zero Waste by 2030 – Overview

On September 18, 2017 the New York City Council Committee on Sanitation and Solid Waste Management held a hearing regarding an amendment to the City charter to establish a goal of zero waste for New York city by 2030.

Part of Mayor Bill de Blasio’s OneNYC: The Plan for a Strong and Just City outlines proposals to create a more environmentally sustainable New York City. One of these projects is Zero Waste by 2030, a program set to accomplish sending zero waste to landfills by that year. This will set a high bar for other big cities in the U.S. to follow. Several initiatives have been launched to move toward this goal, which include expanding New York City’s organics collection programs, improving curbside recycling, and reducing usage of disposable plastic bags.

If accepted, the bill would legislate the move toward the goal of Zero Waste to landfills by the year 2030.

Testimony by the Commissioner of Department of Sanitation, Kathryn Garcia

Expanding organics collection and recycling stood out as a major point of discussion in this hearing. Since organic material makes up one-third of the city’s waste stream, increasing organics collection on both a residential and commercial level is a vital step in achieving Zero Waste. Kathryn Garcia, Commissioner of the Department of Sanitation, spoke to these efforts.

In 2013, the City launched a pilot organics collection program is Staten Island. Today, it now serves 570,000 households and 800 schools across the city. According to Commissioner Garcia, by the end of this year, 3.3 million New Yorkers will have regular DSNY organic curbside collection service.

No other city program in the United States has an organic collection services on such a large scale.

Commissioner Garcia acknowledged the challenges of this endeavor. Despite convenient collection programs and positive attitudes towards recycling, there is much room for improvement in composting participation. New Yorkers generally know what material is recyclable; however, there is some public doubt over whether recycled materials are actually being processed correctly and reused, which may contribute to lower rates of participation.

There are two ways in which participation is being measured. Access to the programs and means to recycle is a major metric, representing the level of penetration across the city of all the different programs provided to residences. The second metric is tonnage. Numbers are published by district every month reporting how much waste material the city is producing.

Many of these efforts are targeted at homes and individuals, but the participation and regulation of commercial entities is paramount. The role of big businesses and how their waste is regulated was another crucial discussion point at the meeting. Commercial solid waste in New York City adds up to over 3 million tons annually, and one-third of this is compostable material. In July of 2016, DSNY began enforcing the regulation requiring large businesses such as hotels, stadiums and food wholesalers to separate their organic waste. In addition, all public and private schools are now mandated to meet DSNY guidelines for separating recyclable material. Though this is in place, Councilman Antonio Reynoso expressed concern over whether reaching Zero is possible if we have irresponsible private waste haulers. The Business Integrity Commission (BIC) is tasked with collecting data on commercial recycling rates. However, there is question to the reliability of private commercial waste haulers and there seems to be a lack of systems to ensure that the commercial waste collectors that pick up sorted waste from businesses are actually doing what they are supposed to do.

Testimony by Melissa Iachan, Senior Staff Attorney in the Environmental Justice Program at NY Lawyers for the Public Interest, presented a video of private haulers failing to sort waste. Private hauler Quality Waste Services is seen picking up trash from Juice Generation, a smoothie and health food store that separates recycling and organic waste. As the hauler pulls up to the storefront, organic trash bags are carelessly thrown into the truck with non-recyclable waste, cardboard and other valuable recyclable material.

The Commissioner admitted that these haulers are rarely held accountable; typically, it is the businesses that are fined for mixing material. Stronger enforcement is needed where responsible businesses are recycling correctly, but irresponsible haulers fail to sort the waste. It is important to recognize the push to promote recycling procedures and provide access to waste removal services, but how do we ensure these efforts are carried out correctly?

“I can tell you that many sanitation companies still are not recycling a single can or bottle,” He said in testimony. Campbell argued a need for strong policies that hold companies accountable. Furthermore, Campbell calculated that if New York City increases recycling rates to 70%, 3,300 local green jobs will be created. He expressed positive attitudes on behalf of the union towards installing stronger regulation, stating that they are in full support of the Zero Waste by 2030 goal.

There is concern over whether members of the City Council will be able to get on the same page, but according to Reynoso, Zero Waste by 2030 is possible. But to see this happen, the entire council needs to be on board and lobbying for that should start immediately.

Overall, the Department of Sanitation, the City Council, and testifying parties displayed positive attitudes towards establishing a bill to reach Zero Waste by 2030. If this happens, the amendment can pave the way to establishing long-lasting changes in New York City’s contribution to sustainability. Legislation is a critical step to safeguard the vision presented by the Mayor in OneNYC and to secure commitment to waste reduction beyond De Blasio’s term. Introducing mandatory practices can cause powerful rippling effects in the recycling and composting culture for residences, schools, and industries. As the nation’s biggest city, it is our responsibility to strive for the greenest ecological footprint possible.