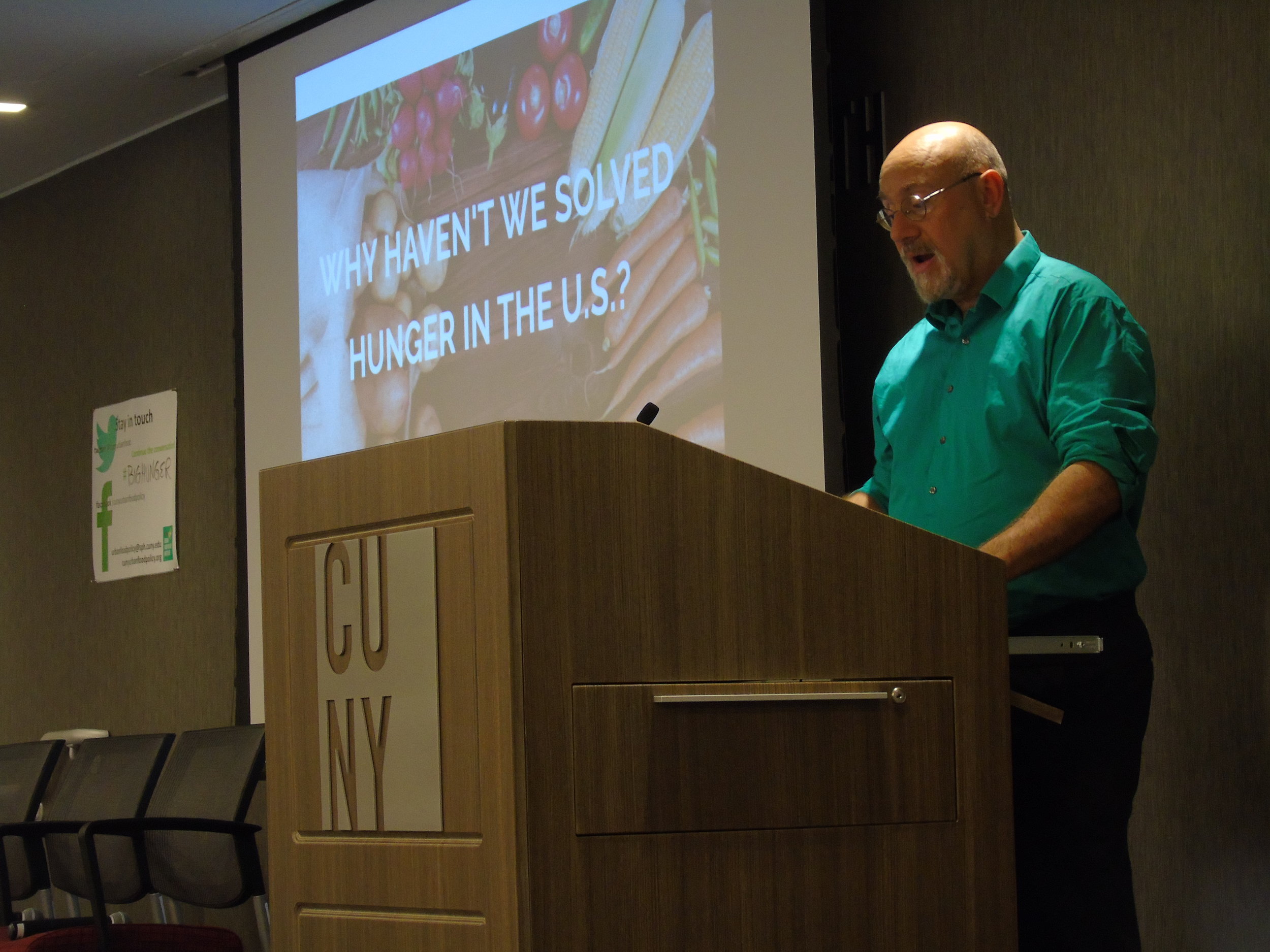 Above: Andy Fisher presents key findings from his book Big Hunger at the CUNY Graduate School of Public Health and Health Policy on May 18th, 2017.

On May 18th, 2017, Andrew Fisher discussed his book Big Hunger: The Unholy Alliance Between Corporate America and Anti-Hunger Groups, (MIT Press, 2017) with Toni Liquori, founder and executive director of School Food Focus, and Greg Silverman, executive director of West Side Campaign Against Hunger. The panel was moderated by Jan Poppendieck, senior faculty fellow at the CUNY Urban Food Policy Institute and author of Sweet Charity.

In his book, Fisher takes a critical look at the business of hunger and presents a new vision for the anti-hunger movement. Though food charity has been successful in transferring large amounts of food to needy people and has become deeply embedded in American civil society, Fisher draws on his own experiences volunteering at a food pantry to argue that food charity “comes with a side dish of collateral damage to human dignity.” Even the larger federal food programs, he suggests, by defining the problem as “hunger,” may be helping to obscure the underlying structural issue: economic inequality driven by low wages. Further, he points out that many anti-hunger organizations are reliant on corporate donations of food and money from the very corporations that are offshoring jobs, cutting benefits, exploiting workers and rural communities, and fighting wage increases.

He argues that anti-hunger organizations have an obligation to expose the contradictions between corporations that profit from selling nutritionally-poor foods in food deserts and food-insecure communities while simultaneously presenting themselves as well-meaning providers of much needed food pantry donations and support. Such a critical perspective, he suggests, can help create the necessary dialogue to move to a more integrated approach to end hunger in America with more just and innovative approaches.

Fisher lays out a vision that encompasses a broader definition of hunger characterized by a focus on public health, economic justice, and economic democracy. He highlights the work of several grassroots organizations that are making strides to end rather than manage hunger.

Respondents challenged Fisher on some issues while agreeing on others. Greg Silverman noted that his work at Share Our Strength had been funded by Walmart, but felt that the source did not diminish the importance of what he had achieved there in developing the highly regarded Cooking Matters program. Liquori offered the work of School Food Focus with chicken processors to develop a Certified Responsible Antibiotic Use standard for institutional purchasers of chicken as an example of productive compromise with the food industry. 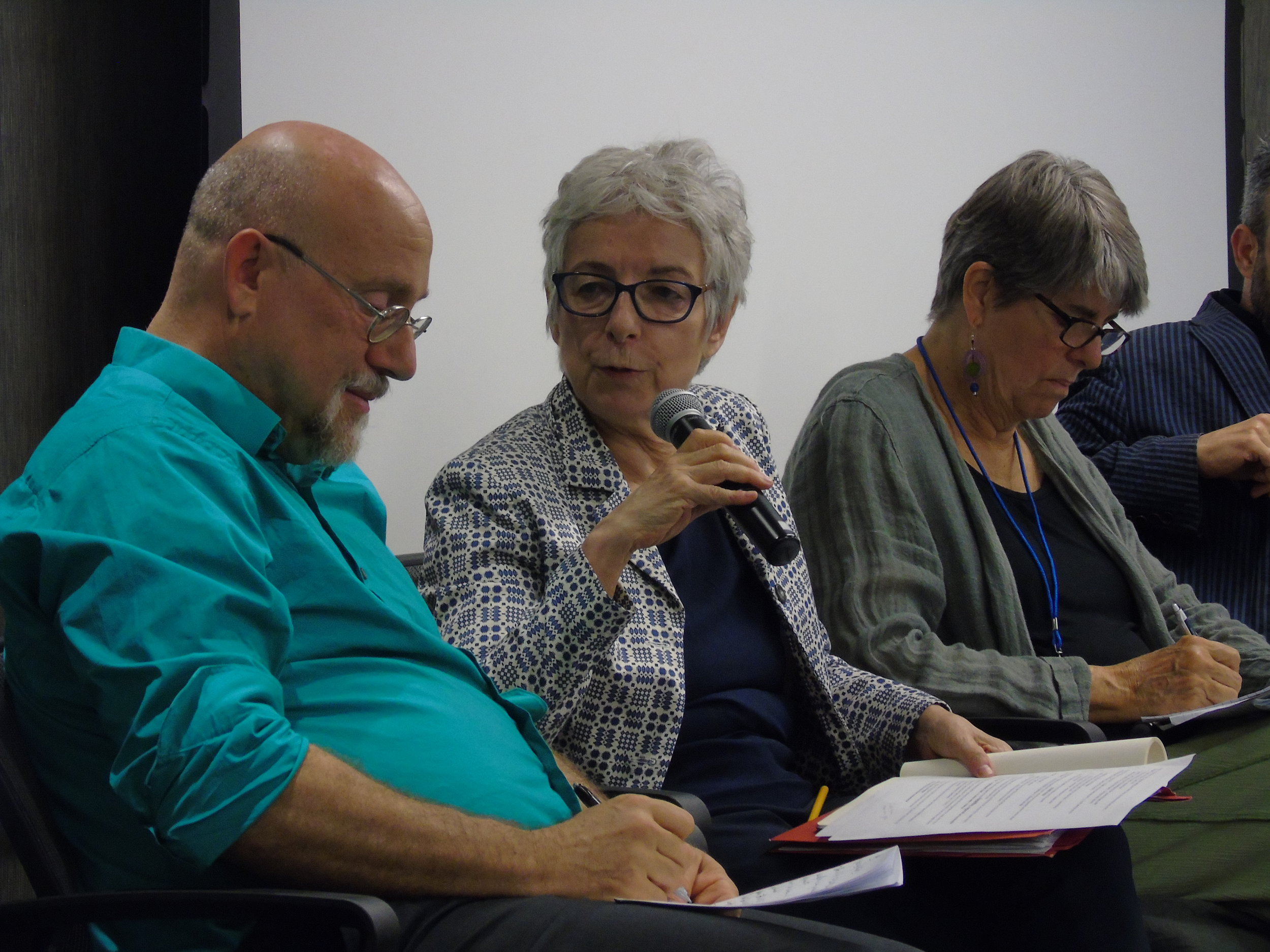 From left: Andy Fisher, Toni Liquori and Jan Poppendieck engaged in discussion after Fisher’s talk on May 18th, 2017.

Toni Liquori of School Food Focus discussed the parallels she saw between school food and food pantry issues, and used the work of Focus to illustrate how values-based procurement for food assistance programs can improve the food system for both consumers and producers. All panelists emphasized the importance of innovation to improve the welfare of those most affected by hunger, including children. Summer food programs in particular could benefit from alternative models such as delivering meals to food deserts as opposed to requiring families to commute to a summer site, or allowing families to pick up a week’s worth of meals to consume at home instead of requiring children to travel to the site every day.

Greg Silverman advocated for a both/and, rather than an either/or approach to direct service and advocacy. Silverman described the ways in which the pantry at WSCAH is more like a food co-op than a traditional pantry. It inverts the classic food pantry power dynamic between volunteers and recipients, as shoppers of the pantry are also volunteers. This framework facilitates the development of networks and relationships, increasing community cohesiveness and fostering mutual aid and sustainability.