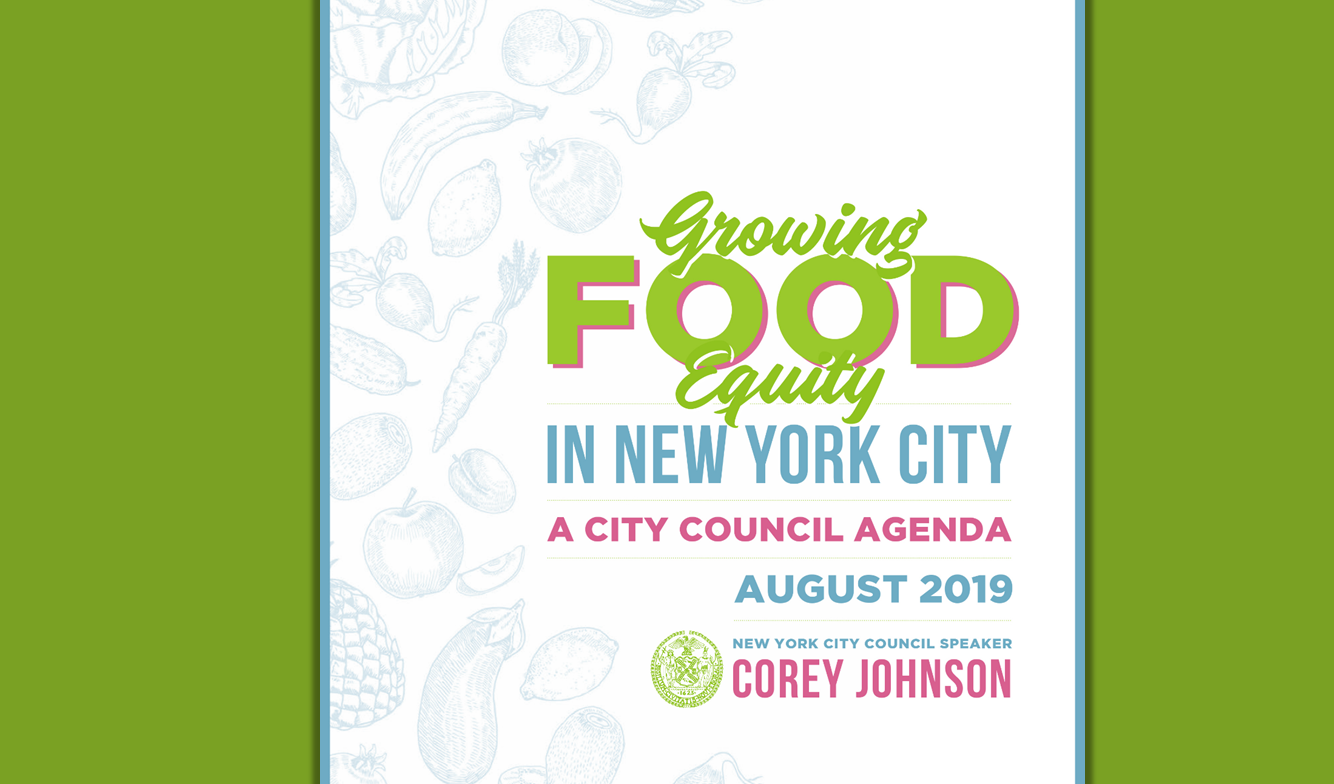 On August 1st, New York City Council Speaker Corey Johnson presented his plan to address food inequities in New York City, defined as unequal access to healthy food and socioeconomic, racial/ethnic and other disparities in the impact of the food system on well-being.

The report outlines the food-related problems the city faces including high levels of food insecurity, lack of access to healthy and affordable food for New Yorkers in low-income communities and communities of color, and food waste.

The Speaker’s plan proposes several major new bills and policies for consideration by the City Council to codify and strengthen the Mayor’s Office of Food Policy; to require the city to create a multi-year citywide food plan as well as a stand-alone urban agriculture plan; and to expand the annual New York City Food Metrics report to include reporting requirements for city food initiatives that are not currently documented. The Speaker’s Growing Food Equity report makes dozens of other recommendations in such areas as food governance, hunger, food waste, and school food. 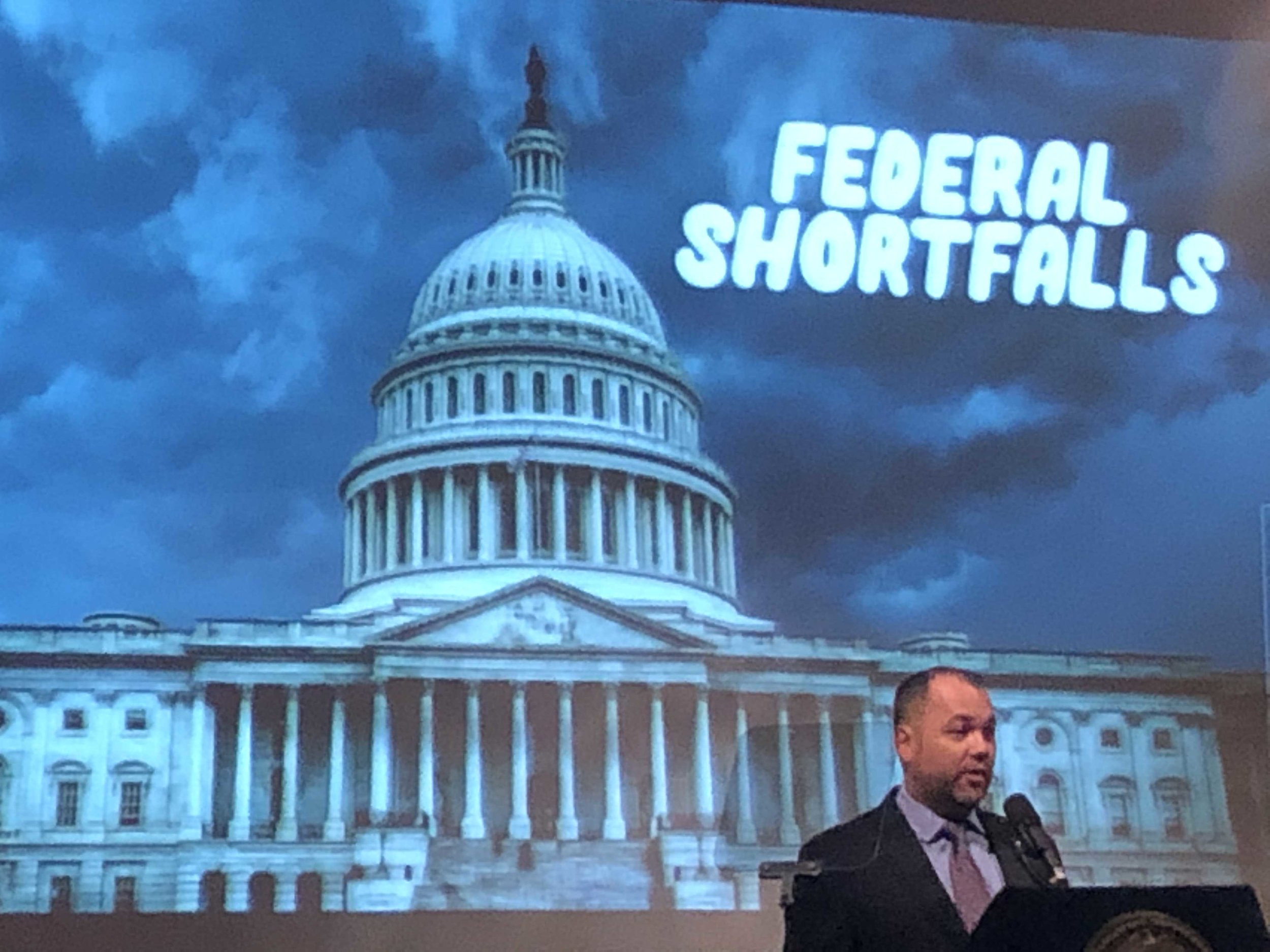 At the press conference releasing the report Speaker Johnson observed:

“New York City is one of the richest cities in the world. Yet more than one million of our residents are considered food insecure. That’s unacceptable. Food is a human right, which means as a city we need to establish food policies to help ensure that none of our residents are going hungry or relying on unhealthy foods to survive because they don’t have the means or access to nutritious meals. These proposals are my vision for food justice for New York City. I want to create a better New York where equitable food policies are front and center in everything we do.”

The CUNY Urban Food Policy Institute welcomes this report and looks forward to working with the Speaker and other City Council members, the Mayor’s Office, community organizations and food justice groups to translate its bold vision into reality. In the weeks and months to come, we will prepare more detailed analyses of the agenda and host public forums to discuss the plan. We encourage all New Yorkers who care about food equity and food policy to suggest strategies for implementation, monitoring and, as needed, improvements.

The Speaker’s agenda proposes a number of policies that have been recommended by the Institute over the past two years: a comprehensive food policy plan for New York City; an update of the New York City Food Metrics process; and strengthening of the Office of the Food Policy Coordinator.

As we described in 2018, these initiatives helped to elevate food policy in New York City and created new platforms and governance mechanisms for city officials, community residents and civic institutions to improve access to healthy affordable food, reduce food insecurity, and improve the low wages and poor working conditions of food workers.

But on many key health and social indicators, the progress has been modest and gaps in food access in New York City by income and race/ethnicity continue to be wide, as documented in several Institute reports. In our report, we called on New York City officials to ensure that five or ten years from now, we could all celebrate progress in reducing food insecurity and diet-related diseases, rather than simply continue to note the health, social, economic and moral burden of our inequitable food system and food policies.

The Growing Food Equity in New York City report and plan have the potential to initiate a third wave of food legislation and activism, one that can both build on past successes and overcome their limitations. As the Council considers the Speaker’s proposals and as New Yorkers discuss them, our previous work on food policy in New York City suggests these lessons that may guide our next steps:

In the coming weeks and months, the Speaker, the City Council and the Mayor will begin to flesh out a timeline for taking action to grow food equity in New York City. Food Policy Monitor readers, food advocates, community residents –and the CUNY Urban Food Policy Institute can together chart their plans to support, nurture and strengthen this process.

By Nicholas Freudenberg, Distinguished Professor of Public Health at City University of New York and Director of the CUNY Urban Food Policy Institute and the Institute faculty and staff.